BRI POSTED HERE AND I'VE COPIED
IT TO THIS THREAD AS A STARTER:

In the first video, after the man with the pizza box seems to confront Umbrella Man by asking if he was “a cop,” some have speculated from his largely unintelligible response that he says: “It doesn’t matter.” If there’s any truth to this story at all, this could very well be it.

Posted to this thread because this could be a sheer waste of time.
Lots of sleuthing on Twitter. Seems to be a dead end. 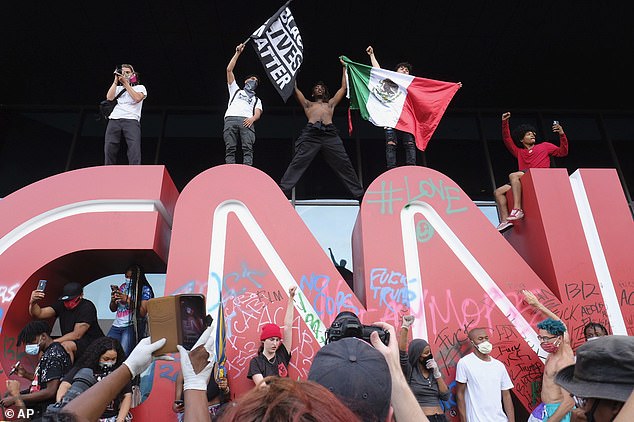 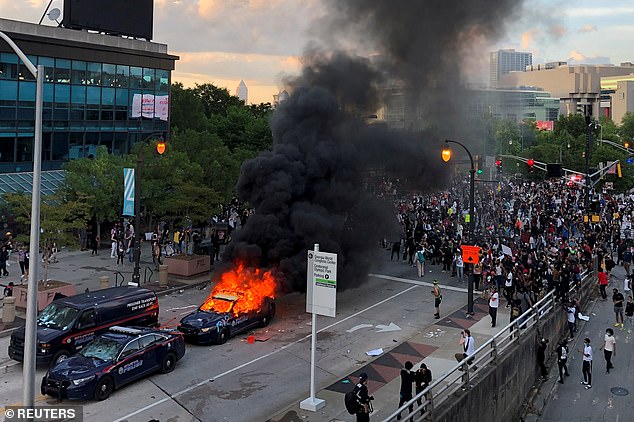 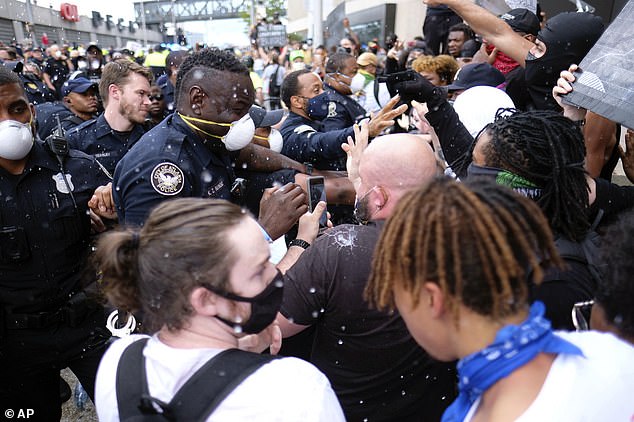 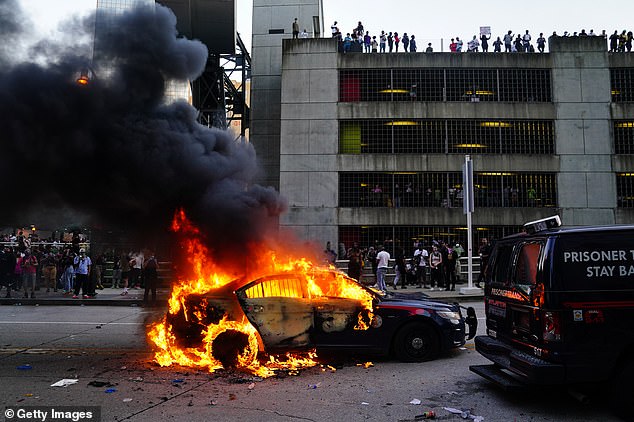 In Minneapolis overnight, reported gunshots were not one incident,
but continuous incoming gunfire which forced police to withdraw
and allow protesters free rein:

MINNEAPOLIS (FOX 9) - The Department of Public Safety says shots have been fired at law enforcement officers as units move into control crowds that have gathered outside Minneapolis' Fifth Precinct late Friday night.

Our crews have witnessed the crowd standing outside the Minneapolis Police Department's Fifth Precinct off Nicollet Avenue. At the scene, dozens of people are in the area while flames shoot from a Wells Fargo branch not far away.

Windows at the bank's drive thru have been smashed and graffiti has been painted on the walls of the bank.

In a tweet, the Department of Public Safety says it is sending 350 troopers and officers to the Fifth Precinct. Governor Walz also tweeted that National Guard soldiers were on the ground in the city. He is urging people to obey a curfew put in place.

Shortly after, the DPS said shots had been fired but no officers or troopers had been hurt.


The usury banking satanists not satisfied with the destruction they caused with the lockdowns and the new trillions they are robbing us of?

And, btw, where is the rioting over this?

At this point George Floyd no longer matters.

His death has been hijacked and is now a political football.


'Racist president': Democrats accuse Trump of inciting violence in Minneapolis
Reaction was fierce to the president using the term "thugs"
and saying, "When the looting starts, the shooting starts."

And so, off we go on the next phase of the 'Orange Man Bad' project.

I doubt US Military intelligence are any way involved.
Not an arena for INSCOM

That arena would be ANTIFA and buddies:


Andy Ngô
@MrAndyNgo
This looks like antifa black bloc. Antifa accounts on social media are already
crowdfunding bail money for any comrades that may get arrested. #Minneapolis #BlackLivesMatter #GeorgeFloyd

And just in case you think ANTIFA are a one-trick-pony,
they are co-opted into a globalist agenda - world wide:


Antifa protests against ending the lockdown in Germany

Police deployed water cannons on Saturday in an effort to break up an antifa demonstration that was disrupting an anti-lockdown rally in Hamburg, Germany.

The authorities were called to action after 120 antifa counter-protesters,
dressed in black hoodies, consistently ignored requests to steer clear of the
"Vigil for the Basic Law" rally against the lockdown measures.

The protestors who were permitted to be out were obeying social distancing
protocols, and asking that the government make testing more available as
opposed to keeping everyone quarantined.

But it did not take long before antifa counter-protesters took to the streets
to ironically side with the government against those who simply want to get
back to work.

So why would ANTIFA be militant against ending the Covid hysteria scam?

This had broken the COVID SPELL real good.

It was fading fast anyway - like Pokemon Go did after 3 months.

Hey I have nuanced views on all of the above, the protests, and covid...
but guess what I can't post this on my own facebook wall. Without losing friends and getting doxxed or worse.
So I will leave this here.


Protesting Police Violence Is Critical. But Why Are the Social Distance Shamers Suddenly So Quiet?

Lousiville Police and National Guard opened fire
because they said "someone" fired on them.

There is no confirmation that the person who was killed
was a gunman or the gunman who allegedly opened fire. WAVE 3 News’ Phylicia Ashley reported that a large crowd has amassed at 26th and Broadway, where a man was shot dead after LMPD and National Guard officers allegedly were shot at by someone in a crowd.

They returned fire, leaving David McAtee dead shortly after midnight. As of 10:45 a.m. Monday, Ashley reported McAtee’s body was still in the street.

“He didn’t hurt nobody, didn’t deserve to get shot down like he did,” McAtee’s sister said. “I don’t know what happened, but whatever happened here, my brother didn’t do nothing wrong. He was an innocent person, and innocent bystander. He did not deserve this at all.”

McAtee’s sister also said the crowd that was gathered before the shooting wasn’t taking part in the protests that have packed Louisville city streets the last four nights.

She said a group meets in that area every Sunday night for food and music, adding that her brother was helping serve food. McAtee owned Yaya’s BBQ Shack next door to Dino’s Food Mart.

Monday’s crowd has gathered to show its support for McAtee’s family. The group is urging peace, Ashley reported. The Rev. Charles Elliott was seen consoling a young man named Emannuel, who at the moment is helping lead the communication between the crowd and police.

“We need peace," Emannuel said. "It seems like a lot of people that come out here ... ready for war. I can’t let that happen. If I have to put myself in between that so that they don’t go to war, it’s what has to be done.”

Once a tense scene, Ashley reported the crowd has calmed down, adding that Louisville Mayor Greg Fischer arrived after 11 a.m.

Why is this is being allowed?
Obviously the criminals running the state and city governments are allowing it.

Since these state/city criminals are merely stooges, more or less, for the master criminals who own the NY Federal Reserve Bank the object is to increase public debt.
Perhaps not enough new debt had been 'justified' as a result of the economic destruction of the lockdowns so now even more new debt will be 'justified' to repair the riot damage.
Sort of makes sense when you look at the public debt (and interest payments to the usurers) angle.
Top

[youtube]https://www.youtube.com/watch?v=xtIJXYaYVO8[/youtube]
Minds are like parachutes.
They only function when open.
Top

There used to be a United States of America.

Now there are Two United States.

You can watch these Two USA's on on their National TV stations.

On Liberal media, the Orange Man is careening into outright Totalitrianism!
Meanwhile the 100% peaceful, liberal protests are met with Police Brutality!

On FoxNews, the Orange Man is battling stormtroopers of outright Anarchy!
Meanwhile, crazed mobs and looters have declared open war on the Police!

The Liberal TV cheerleaders are actively censoring news of police being shot!

None of this is "news". This is just tribal shit now.

It's now degenerated into purile propaganda.


Anyway, this ex-Antifa guy has done a new video on them:

George Floyd was a victim of this system BEFORE he was murdered by it.

That requires equal access to a future for all.
.
Minds are like parachutes.
They only function when open.
Top

If you are in a hurry, the Awesome winds up at 9mins.
The rest is not bad either.

The first 15 mins: covers the basics of breathing and asphyxia.

From 15 mins: is a critique of the police autopsy statement.