Interesting but he's barking up the wrong tree (on purpose?)/
he fails to mention the source of the problems he cites, the top of the 'poison food chain'.... namely the owners of the Bank of England and the fact that UK is not allowed to issue it's own money but must borrow it.
Interest payments(aka IRS) on Public debt are an exponentially growing cancer that impoverish nations..and reek all sorts of hell upon the populace.
This video lesson applies to the UK also and to any country that has a private central bank loaning money to the government at interest.

MichaelC:
This video lesson applies to the UK also and to any country that has
a private central bank loaning money to the government at interest.

For sure, any country that no longer prints its own currency
is a slave state being milked for gain by bankster hoodlums.


Today is a pivotal moment in the UK election.
An election like no other before.

Old black and white lines of division are history.

Like John Major appealing to people to vote AGAINST
the party he once LED as PM !!?!

He is heralding the end of poltical tribalism:

Of course these two have always a lot in common, but what I'm remarking
on is that regardless of motive or cause the tribalist divisions are collapsing.

Time was when all in a political party had to toe the party line.
And ther was a single party line.
It was a tribal oneness.

Now it's a spectrum.
From Black and White to Rainbow!

Corbyn has to KO

Their showdown debate is at 9:00 PM BST 4:00PM EST
Minds are like parachutes.
They only function when open.
Top

The establishment prefers to divert from the election now until voting day.
In a shorter campaign people don't think too deeply.
Longer campaigns tend to favor Labour.

Of course, it's a total concidence that a terror attack has happened.

They don't need that scale of slaughter this election, figuring they're ahead.

This was just insurance. A down payment.

They'll be back if they need to tweak the popular psyche some more.

The killing will continue -until morale improves.

But this all means there is no agenda to vote labour ?

The UK Media is anti-Corbyn. Some rabidly so. Sky and BBC in TVland.

Curiously, just like in the last election, the Conservatives start with a
big 10+points lead which then halves over the first two weeks.

Why? The early polls are fake ones designed to undermine Labour.
Later they "adjust" the result to begin to approach reality.
Otherwise they would be called out.
It's a short-term bias play.

So, rather than Boris having an 80 seat majority, it now "turns out"
that there may be no overall majority for Boris.

In fact the votes of only about 1 in 1,000 key voters could be pivotal.

A cross-party alliance of opposition politicians has launched an 11th-hour appeal to anti-Tory voters to consider switching allegiance in Thursday’s general election, amid signs that a late surge of tactical voting in a few swing seats could deprive Boris Johnson of a majority in parliament.

The calls from senior Labour, Liberal Democrat and SNP figures come as a major poll suggests Johnson’s likely majority has been cut in half in the last two weeks – from 82 a fortnight ago to just 40 with four days to polling day.

The analysis of almost 30,000 voters, for the pro-EU Best for Britain campaign, also finds that tactical votes by as few as 40,700 people in 36 key seats could prevent Johnson from forming a majority government.

Frustrated UK Brexit supporters have voted overwhelmingly to exit the EU
-as the working class deserted both the Farrage Brexit Party and Labour to
put the Conservatives into power with a large majority.

The total collapse of the anti-Brexit Liberals was another indication of the
anti-EU tide which has surged to reject the EU even more comprehensively
than in the original close referendum.

Opinion has hardened. Britain wants OUT!

And so does Scotland -where the SNP are likely to sweep back to the heights
which served as a backdrop to the last independence referendum.

Scots have just sent a bombshell message to the rest of the UK:
Do your Brexit -We Want to Stay in the EU, so We are OUT!

It's going to be hard for Westminister elites to deny Nicola Sturgeon a new
referendum, considering that the looming hard Brexit is a material change
which entitles the Scots to vote anew.

Similarly, Northern Ireland will find itself more and more closely aligned
by mutual self-interest with the Republic of Ireland - and not the UK.

The edgy new question -still unasked- is this:

will the United Kingdom remain United or eventually fracture in three?

There is already a Neoliberal hue and cry against Jeremy Corbyn and his
so-called populist marxist policies. But Corbyn himself is anti-EU. He was
held hostage to Labour's elite and southern support for Remain.

He is also a climate change skeptic but again had to toe the party line.

Labour Remainers ignored the referendum and destroyed Labour.
Labour Neoliberals deserted the working class long ago.
Corbyn didn't do any of that.

Britain Wants OUT of the EU. Period.

Anybody who stood in front of that train got vaporized.

This volatile electorate cares increasingly about issues -not parties. 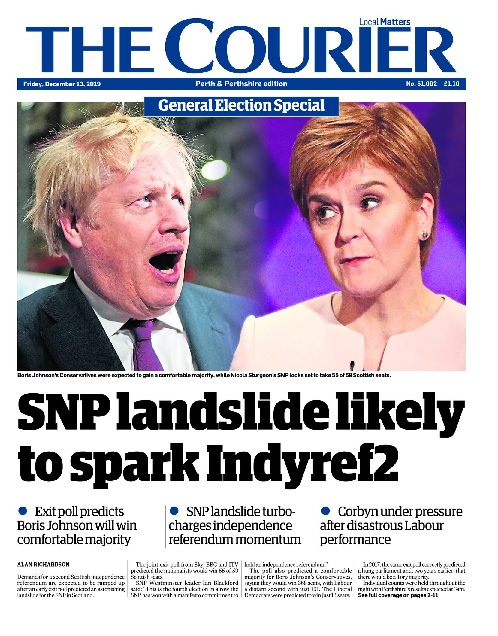 It remains to be seen if 'Brexit' really means Brexit.
Top

Yes we will see and if the climate change agenda becomes reality.
~"“True observation begins when devoid of set patterns, and freedom of expression occurs when one is beyond systems.”"~
Top


Jonathan Partridge
4 days ago
“And this is the future Prime Minister talking.... 41:20

So she’s a prophet too!