krammer wrote:I don't know the timing of the photo, but perhaps this was taken just after everyone cleared out and medical help has not yet arrived.

I think they lie out for a while before they are painted with blood.

I started off thinking it was a Hoax and have been waiting on some Hard Evidence that People died which never seems to come.

Are we supposed to argue over the number of Shooters while the whole thing is a massive hoax.. is that the Idea?

by ANDREW BLANKSTEIN and TRACY CONNOR

Bruce Paddock, 58, was detained at a Los Angeles assisted-living facility, where he was awaiting surgery for spinal stenosis. A felony complaint said he had over 600 explicit images of minors in in 2014 and also swapped pornography.

He faces 19 counts of sexual exploitation of a child and one count of possession of child pornography, the complaint says.

An attorney who Paddock said had represented him in criminal matters in the past told NBC News he is no longer representing Paddock and declined comment.

At the time of the mass shooting on Oct. 1 that left 58 dead, Bruce Paddock told NBC News that he had not been in touch with his brother Stephen for 10 years and had no idea why the professional gambler would have opened fire on music festival attendees from his room at the Mandalay Bay.

"I don't know how he could stoop to this low point, hurting someone else. It wasn't suicide by cop since he killed himself," he said at the time. "He killed a bunch of people and then killed himself so he didn't have to face whatever it was."

It was Bruce Paddock who revealed that their father was a bank robber who once made the FBI's most-wanted list and was judged by authorities to be "psychopathic" with "suicidal tendencies."

But he insisted that his brother wasn't "mentally deranged" and noted that Stephen had never been in trouble with the law like he had.

Court records show Bruce Paddock has a criminal record stretching back to the 1980s, with convictions for vandalism, criminal threats, theft and driving with a suspended vehicle and other arrests for which he was not convicted.

Paddock was annoyed that his brother's monstrous crime had brought attention to his own misdeeds, which he described as "minor." He had to scramble to pay a fine after it was reported that there was an active warrant for his arrest from a vandalism case in which he failed to perform community service.

FBI agents visited him twice after the shooting, he said, and mostly were interested in his brother's childhood.

In the days after the Vegas carnage, he frantically tried to reconnect with members of his fractured family, leaving messages for another brother, Eric, and reaching out to the attorney for Stephen's girlfriend, Marilu Danley.

"I want to see if we could patch up what we destroyed so many years ago," he said. He added that he had only succeeded in reaching his elderly mother, "and she's yelling at me all the time not to talk to anyone."

Earlier this week, Paddock said he was concerned about the fate of his brother's remains and had reached out to the coroner's office in Nevada to see if he could claim them.

Well that's the end of Bruce Paddock as any kind of reliable source.
Not with this hanging over him. Also undermines all he's ever said.

Stephen Paddock's brother threatened to kill a friend ... according to legal docs. Bruce Paddock was a squatter in a San Fernando Valley home in 2014. He was in a feud with a guy named Hector Cruz, the property owner.

According to docs, Bruce had been tampering with machinery and equipment, and the renter of the property complained to Cruz.
When Cruz confronted Bruce, according to docs Bruce adopted an aggressive stance, clenched his fists and said, "If you keep f****** with me, I am going to kill you and drop you in the desert."

And there was another incident, where Bruce allegedly approached Cruz and said, "Hit me like a man," and then Bruce punched him forcefully in the arm.

Cruz wrote in legal docs, "I am extremely afraid of Paddock, who has intimidated me by his violent character and destruction of my business office and my service bay."

Cruz also said Bruce was a habitual drug user and seller who used meth and weed, and his behavior is "extremely erratic and unpredictable."
Cruz had actually asked for a temporary restraining order against Bruce and the judge granted it.

From what I have heard, Bruce Paddock is not the brother that was interviewed by the news. Bruce is another brother and not the same guy as shown in the picture above (that is Eric Paddock).

This just gets stranger and stranger. Apparently Paddock removed his laptop hard drive and got rid of it somehow, before shooting himself.
Top

That missing hard drive is a red flag indicator of conspiracy.

Sure Paddock could have had an unlikely motive to cover his
tracks on the internet - but so would other co-conspirators or
intelligence handlers who wanted to scrub traces of their own
interaction with Paddock.


krammer: This just gets stranger and stranger.

And now - Even STRANGER!!


I thought that an interview with the FBI
would end with a pretty standard line:
"Ok - that 's it for now, but you ain't planning to leave town, are you?"

Campos: "No, not leaving town.
Just leaving the country."

I really liked this video I watched recently. Although I dont have any clue if they have any skills in the study of behavoir, you can see for yourselves that something doesnt quite sit right in both the Interview with Campos on Ellen, they do show very clearly how she is leading the scripted interview, very very soft approach, nothing at all leading in the questioning of him...

and then on the Sheriff who seems to give away things with his press conferences.

Of course its all conjecture, just seems like there is a cover up a foot.

What if the entire Oct. 1 operation was conducted via an
advanced air assault? Flight records show it could be likely

Preface: I want to make clear that I am in no way saying that this
scenario for sure happened. I am merely reporting on data which
I’ve found after scouring hundreds of hours of information, flight
data records, and video footage captured between the hours of
9:40 and 10:30 p.m. on the night of October 1.
(i.e. If it happened this is how it occurred)

LAS VEGAS (INTELLIHUB) — Flight records, aircraft transponder data, and
video footage all reveal that covert air assault and EXFIL operations may
have transpired on the night of the massacrr......... 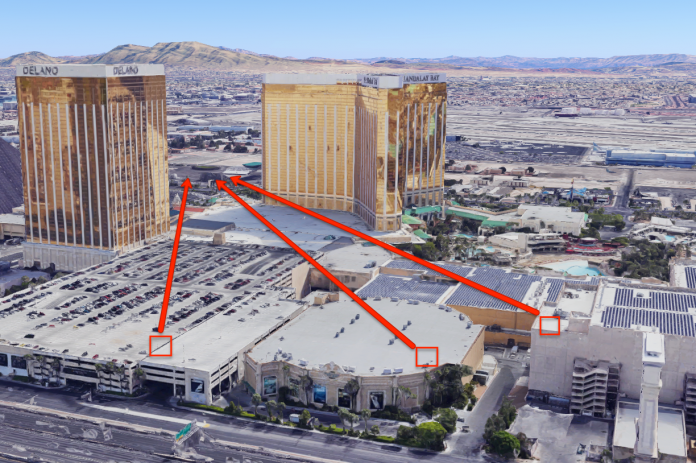 This angle has lots of merit.

The creep factor has just been cranked up on this one.
"Now water can flow or it can crash. Be water, my friend." - Bruce Lee
"Three things cannot be long hidden: the sun, the moon, and the truth." - Buddha
Top

this video is also interesting on this same topic! [youtube]https://www.youtube.com/watch?v=87ggHaEFNU0[/youtube]
Top

The strobe light was a diversionary tactic. Not sure what this might mean but there is a company called Machine Gun Helicopters in Vegas..... https://machinegunhelicopters.com/

I am convinced these two are the same person.

Look at who is handling the Las Vegas Victims’s fund!

Clark County officials announced on Tuesday that Attorney Kenneth R. Feinberg will lead the community efforts to distribute the money from the Las Vegas Victims’ Fund.

The funds were raised through a GoFundMe page established by County Commission Chairman Steve Sisolak and Clark County Sheriff Joe Lombardo. 84,000 people and business donated more than $10.4 million to help those affected by the 1 October mass shooting.

Feinberg served as the Special Master of the Federal September 11th Victim Compensation Fund, and also helped administer funds for victims of the Pulse Night Club shooting in Orlando and for victims of the Boston Marathon bombing.
"Now water can flow or it can crash. Be water, my friend." - Bruce Lee
"Three things cannot be long hidden: the sun, the moon, and the truth." - Buddha
Top

One of the first things I noticed in the initial video's on the night was
a helicopter approaching the Mandalay Bay hotel from the left and
going around the back, reappearing to the right after what seemed
like a long time.

It's here in this short video:

And here also @ 7:25 in the video SouthParkFan posted:

The video opens with news that Paddock's girlfriend may be withholding
information from police. As usual no info on what she'd be withholding.
But forget that for a moment.

There's bombshell stuff at @ 7:13 from a
lawyer representing some of the victims:


"...now that we know that there were two other police officers
who there with him [Jesus Campos] before the shooting....."

WHAT?!! What two officers?!


"two other police officers from the MGM were there on the floor prior
to the shooting..... two off-duty officers of MGM security responded
to [Jesus Campos] prior to when the shooting began....."

I thought that there was a gap of 40 seconds between the time that
Campos was (allegedly) shot and the time the mass shooting began.

Now it turns out there was time for two off-duty security to respond
to the call. They musta had 35 second response time then <sarcasm>.

P.S. from the video someone (police/security) fired an
accidental revolver shot in Paddocks room. No details.

"Curiouser, and curiouser."
As Alice once said.
Minds are like parachutes.
They only function when open.
Top