- shooter a 64yrs old male
- female potential accomplice in custody no longer a person of interest.
- no prior police contact

Little information on the background
to this horrific mass shooting so far.

We'll get more in the hours ahead.

Within the next 15 mins we expect to have
info on the police forced entry into the hotel
room from whence the shooting is alleged to
have come. 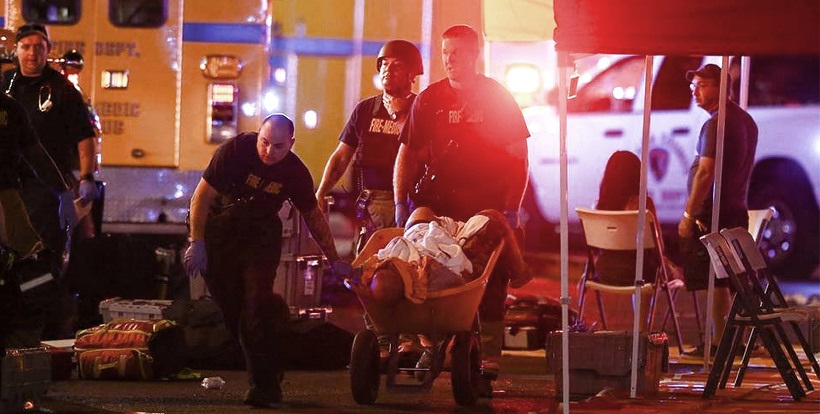 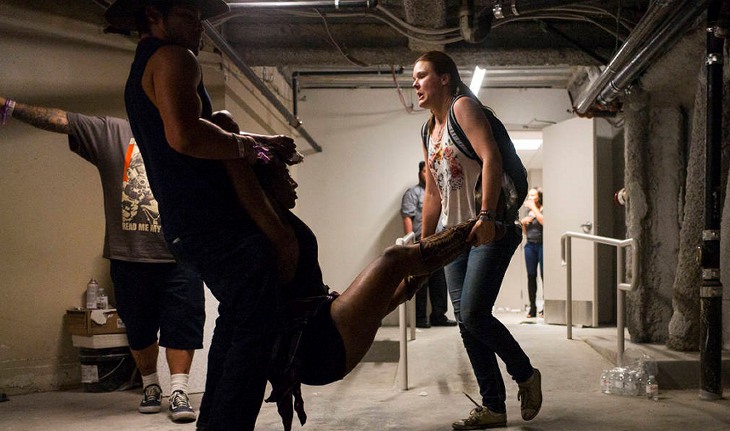 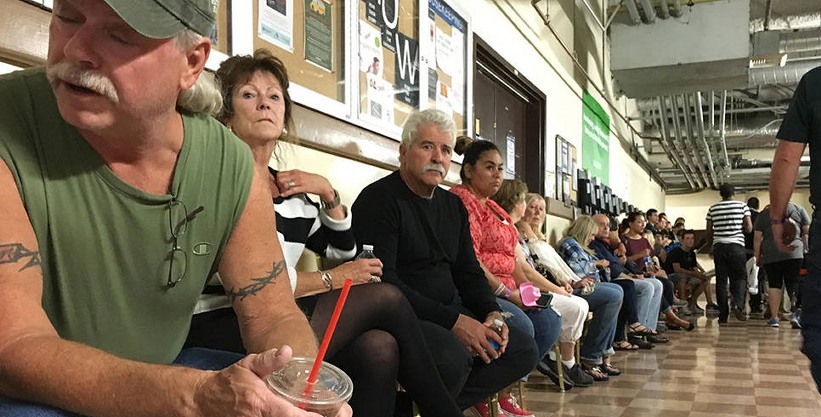 Audio only has been released of the
breach by police into the hotel room.

According to local reports, the victims were shot with a high-powered assault rifle from the 32nd floor of the hotel. Police responded to the incident about 10 p.m. local time. In a media briefing held shortly after midnight, police reported that a suspect was down.

A Las Vegas hospital first reported that two people were killed in the attack, with 24 injured. But later in the night, Police Sheriff Joseph Lombardo confirmed that at least 20 had died. That number was then updated to “in excess of 50” shortly after 3:30 a.m. local time.

Lombardo confirmed that Paddock was dead. “We have no idea what his belief system was,” Lombardo said. “Right now we believe he was the sole aggressor.” He said that social media conjecture that there had been multiple shooters at other resorts and explosives going off were “proven to be false.”

Police also said Monday morning that Paddock’s companion, Marilou Danley, who had been sought as a “person of interest,” had been located and was now not believed to be involved in the attack.

https://www.reddit.com/r/conspiracy/com ... iple_dead/
Last edited by Fintan on Mon Oct 02, 2017 8:51 am, edited 2 times in total.
Minds are like parachutes.
They only function when open.
Top

NPR is reporting he was dead when police arrived, they suspect suicide.

Interesting how quickly things can change from truth to "the news that's fit to print".
Can't be beat, won't be beat, etc.
Top

Found a forum post that copy-pasted the text of an article from 11pm on the night of the shooting. In this version, police killed the shooter.
http://www.dreamindemon.com/community/t ... ory.91537/

The article that is linked to at the bottom of the post was updated early this morning and apparently edited. Now he died from a self-inflicted gunshot.
https://www.reviewjournal.com/local/the ... gas-strip/

So which is it? Did the Sheriff get it wrong at first or was the official story altered after the fact? Story inconsistency number 1?
Can't be beat, won't be beat, etc.
Top

I sort of hoped this would stop under Trump but, sadly, Trump does not issue the orders.
Top

Trump's not giving the orders to the NWO's black-ops boys for sure.
And they are the very people with motive to destabilize Trump.
I notice that Trump moved fast to get the right side of this.

This case must be right up there as candidate for
America's most unlikely mass shooter!

The brother of Stephen Paddock, the suspected gunman in the Las Vegas
shooting that killed more than 50 people, has said that his family have
been left stunned by the news.

“We have no idea. We're horrified,” Eric Paddock said in a brief telephone
interview with Reuters, his voice trembling. “We have no idea in the world.”

Mr Paddock also said his now-deceased brother was
"not an avid gun guy at all".

Eric said Mr Paddock was fond of gambling and country music,
but had no real "religious affiliation, no political affiliation."

"The fact that he had those kinds of weapons is just ... where the hell did he get automatic weapons? He has no military background or anything like that," he added, speaking to CBS News in Orlando, Florida.

This was no dysfunctional loser.
Details here of a regular dude.
He held a pilot's license ffs!

He did work somewhere interesting though:

Possible clues: Paddock had hunting and fishing licenses as well as his
pilot's license, and may have worked at Lockheed Martin as an auditor
according to public records.

It would be great to ask him about all this, but:


Paddock had committed suicide by the time police breached the door to
the room from which the gunman had opened fire at the Mandalay Bay
Resort just after 10pm on Sunday night.

When the SWAT team busted into that room, they had
no idea if he was dead or alive or even there!


The audio published by CBS News captures the SWAT team’s dialogue
with HQ as they prepare to storm the room at the Las Vegas hotel.

An unidentified officer can be heard saying: “We just hit on the suspect's
door. I need everybody in that hallway to be aware of it and get back.

“We need to pop this and see if we get any type of response from this guy,
to see if he’s here or if he’s actually moved somewhere else.”

The response from HQ comes back: "Copy. All units on the 32nd floor
SWAT has an explosive breach. Everyone in the hallway needs to move
back. All units move back.

Another officer then confirms: “One suspect down in 135, floor 32.
Mandalay Bay. I have the floor.”

There's no sound of a self-inflicted gunshot heard in audio
ahead of the breach. So he could have been dead for a while.

So technically speaking, we have no statement of intent
or even evidence he was alive in that room and shooting.

He should be covered in gunfire residue for the forensics.
We'll see as this develops.
Minds are like parachutes.
They only function when open.
Top

"Suicide or killed in a hail of gunfire!"

(sure saves the embarrassment of a trial)

Such a tired same old M.O. every time, don't those military intel psychopaths have any more imagination than that?
Top

Just listening to shooters brother who said he had no affiliation with any religious groups. He was a wealthy guy who had no prior convictions, or even a speeding ticket. He went on cruise holidays, and would send his mother home cookies.

Fintan wrote: This case must be right up there as candidate for
America's most unlikely mass shooter!

Which means OMG it could be "Anyone" therefore no one should have an assault rifle enabling them to resist Foreign UN Milititia installing Marshal Law when the shit hits the fan.
Pour apprécier la vie, il faut contempler la mort
Top

Well the "it was a white guy so he is "psychologically troubled"" narrative doesn't seem to be set up so well.

seems just as likely the the dude was left dead in the room as a patsy and whichever black-ops agent did the shooting had a good exit strategy than that the dude himself was the actual shooter.
Can't be beat, won't be beat, etc.
Top

and i wrote:Well the "it was a white guy so he is "psychologically troubled"" narrative doesn't seem to be set up so well.

seems just as likely the the dude was left dead in the room as a patsy and whichever black-ops agent did the shooting had a good exit strategy than that the dude himself was the actual shooter.

Yep, this is the possible scenario that can never be ruled out when the alleged shooter is too dead to give his side of the story. Smells wrong.
My real name is Gerry.
Top
Post Reply
152 posts