We are now at the start of a year-long series of elections
which voters can utilize to change the whole nature of the EU: 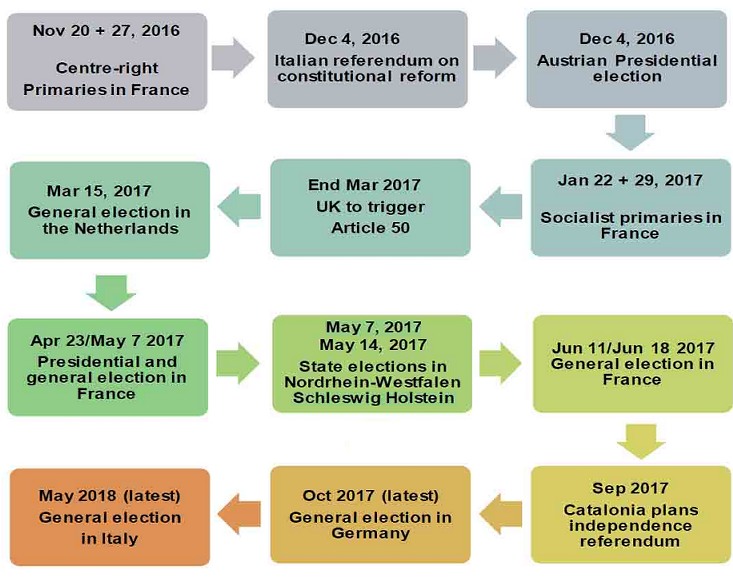 So, considering how key some of these
elections are, by this time next year the
political landscape could be unrecognizable.

Former French prime ministers François Fillon and Alain Juppé will vie for the
conservative nomination in a primary run-off after handing former president
Nicolas Sarkozy a shock defeat on Sunday.

The former president has conceded defeat and endorsed
Fillon for next week's second round.

Great to see the NWO's favorite poisoned dwarf is out of the race.

More on him, shortly, but the other big shock here is the breathtaking
extent of pre-voting opinion poll manipulations by the establishment!!

The partial results are:

Fillon first by a big margin, then Juppé and Sarkozy in third place.

Now compare that outcome with this poll THREE DAYS before voting:

The guy polling last - actually won!!
Talk about a margin of error??!

Of course these glitches in the matrix have everything to do with
this harsh political reality which is facing the NWO's French elite:

IT'S ALL ABOUT SOMEHOW STOPPING MARINE LE PEN.

The far-right leader had 29 per cent of the vote when pitted against Les Républicains' former president, who was eight points behind, and held a 15-point lead over the Parti de Gauche's Jean-Luc Mélenchon in the poll released by Ipsos.

It was one of five scenarios for the first round of France's 2017 presidential elections on 23 April, although one that did not include Les Républicains' Alain Juppé - who remains strong favourite to succeed Francois Hollande as leader.

While Mr Juppé holds leads of between 4 and 7 per cent in three other scenarios including him, the results are likely to add to growing fears that the rise of global populism could see Ms Le Pen secure a surprise victory in the wake of the UK's Brexit vote and Donald Trump's US election win.

Yeah!
I suppose Gaddafi is entitled to cheer from beyond the grave
at this final "just fuck off" from the French people to Sarkozy.

And ol' DSK is probably breaking out the best French champagne.
He's got reason - as detailed here comprehensively in the forum.

Dominique Strauss-Kahn briefly appeared in a New York court on Monday
to face a complaint over an alleged sexual assault by the International
Monetary Fund chief on a maid at a hotel in the city.

Mr Strauss-Kahn is expected to be arraigned at the New York Criminal
Court later on Monday after he allegedly attacked a 32-year-old maid at
a luxury hotel in Manhattan on Saturday. Mr Strauss-Kahn was charged
by police on Saturday with a criminal sex act, attempted rape and
unlawful imprisonment of the maid.

Anyway, the conservative victor, François Fillon
is a hardcore bankster neoliberal. So now it's down
to Marine Le Pen to derail the NWO in France.
Last edited by Fintan on Sat Dec 24, 2016 9:20 pm, edited 2 times in total.
Minds are like parachutes.
They only function when open.
Top 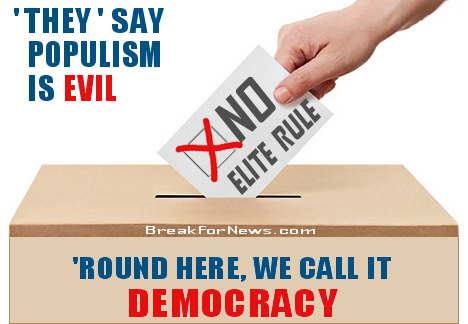 The EU genie may emerge from the bottle
Out of Italy -in less than two weeks time :


ITALY HOLDS KEY TO FATE OF EU AND EURO
http://bit.ly/2gwFnMM

If Matteo Renzi, Italy’s prime minister, loses his constitutional referendum
on December 4th I would expect a sequence of events that would raise
questions about Italy’s participation in the euro zone.

Italy has three opposition parties, all of which favour exiting the euro.
The largest and most important is the Five Star Movement, a party that
defies the usual left-right classification.

The second is Forza Italia, Silvio Berlusconi’s party, which turned rabidly
anti-euro after the former prime minister was forced out of office in 2011.
And the third is the separatist Lega Nord..... http://bit.ly/2gwFnMM

Now, take a look at the trajectory
of support for the 5Star Movement!

Yep, this is gonna get interesting.

Hey Fintan, any news on Ireland and Scotland's position since Brexit?
Top

It's just the way the star on the flag behind
Renzi makes his ears look like that.

WHEN THE WAY IT JUST HAPPENS
THAT YOU LOOK LIKE A PIG.... How Will Renzi’s Failed Referendum
Reverberate in Italy, and Across Europe?


And as that threat looms in France, the EU Elites
are taking no chances with the German elections.

They're planning to counter "fake news". Ahem. Like this:

Under the new laws, participating on BreakForNews would be a criminal
offense. Even Facebook would be subject to government "take down"
orders regarding specific stories or categories of story. With fines of
half-a-million dollars for non compliance.

In other words... they're planning information war.


The German Interior Ministry will create a
"Center of Defense Against Disinformation,"
ahead of 2017’s parliamentary elections.

Really 'Aimed at Censoring Alternative Media' Oppermann specifically
focused on Facebook, calling for the social-network platform to be
penalized if they do not remove articles the government deems
incorrect within a 24-hour period.

"If, after appropriate examination, Facebook does not delete the offending
message within 24 hours, it should expect individual fines of up to 500,000
euros ($523,320)," Oppermann continued.

The Netherlands welcomes Trump in his own words

...a few phone calls was all that was needed
re: Euro refugees

And Marine LePen must be celebrating
as French prosecutors investigate presidential
rival, Francois Fillon for corruption.

France's Fillon and his wife questioned in 'fake work' probe

French conservative presidential candidate Francois Fillon and his wife were questioned for five hours by police investigators on Monday as part of a probe into allegations that Penelope Fillon had been paid for fake jobs.

The allegations, which Fillon rejects, are sapping the popularity of the former prime minister and could shake up the April-May presidential contest, for which he has so far been the clear favourite.