Don't take too much notice of me ol mate.

The great part is you will 'do your best' to explain it, and then I will 'do my best' to interpret it. Win-win.

I'm a country boy from mid west coast Australia who grew up in the 70s and 80s.
I'll give ya the big tip....dabbling in 'quantum f*ckin physics' wasn't a hobby!

Fintan. Love the idea of 'unpacking and then reassembling the Universe in your garage'.
All the very best cobber.
Cheers mate.

a plethora of possible theories
but what do they mean?

current "standard model" physics
promoted by the "establishment"
(yes the very same one that is "big oil")
limits our energy options to "fossil fuel, dumb nuclear,
and Rube Goldberg wind and solar.

all the "alternatives" shown here and others
look at "reality" differently
now "something" is going on
call it aether, zero point, quantum, etc
we may never know what it actually is
but with a logically consistent theory
much more can become "possible" than
what the current standard model now "allows"
formerly known as duane in a previous registration
Top

Shape and Number are One.
Number Shapes Mind and Universe.
Spherical Time spins thru Radial space. And
Inside the Atomic Sphere, Angle Resonates.

Above: The Layman's Guide.
Below: The Science Paper.

http://www.21stcenturysciencetech.com/A ... el_F04.pdf
Minds are like parachutes.
They only function when open.
Top

interesting stuff
but dangerous
elements build up from the platonic solids!
starting to sound like those "intelligent design" sorts

it may not be intelligent, but it is functional and logically
consistent

now compare that to explain the formation of the epola in Dr. Simhony
model but orders of magnitude smaller than the atomic
formerly known as duane in a previous registration
Top

I have done none of the research you have and don't even have the armchair quantum physicists understanding (and I have only now just skimmed this thread). But I'll offer my opinion nonetheless. I suspect that sound is intrinsic to the "solidity" of whatever illusory reality we may find out physical bodies puttering around in.

Take for example cymatics (search on youtube if you haven't seen it). Sound pressure in air at the right frequencies will move physical matter into specific shapes and patterns.

Look at these shapes. The ones which appear "ugly" or "irregular" are the ones that don't sound nice. There is a correlation between seeing things that appear to be "consonant" to our eyes and hearing things that are consonant to our ears.
Can't be beat, won't be beat, etc.
Top

and i:
There is a correlation between seeing things that appear
to be "consonant" to our eyes, and hearing things
that are consonant to our ears.

As in: Beautiful Truth?!
How could I disagree?! lol

and i:
I suspect that sound is intrinsic to the "solidity" of whatever
illusory reality we may find our physical bodies puttering around in.

and i:
Take for example the frequencies produced by adding
the inside angles of perfect geometric shapes.....

Coincidentally, my own research led me in that direction.
These basic platonic shapes resonate Inside with music,
as you show in your table of key frequencies.

To help folks get familiar with the shape landscape you describe
I will post images below. Most link to a full article:

http://joedubs.com/four-earthly-elements/
Note that these angles result from "dividing"
the interior of a plain sphere, more and more.

Note also that 666 is simply numerical platonics at work!

http://joedubs.com/comfortably-numbered/
However, all this is not "mere" abstract platonics number games.
These particular numbers determine the very size of Earth itself.


That's not all - The same platonic shapes come up in the the way
we humans measure time and length. In seconds and in furlongs!

Now, here's the frequencies about which andi posted
Each is derived from the internal angles of these platonic shapes:

http://joedubs.com/store/cosmic-creation-collection/
See how we again "divide inside" to raise the frequency.
Here we are dividing the interior of the large red circle.

Notice that if the Earth was the size of the large red circle,
then the Moon would fit within one of the three blue circles.

All this is consistent with the IO-Sphere ideas
I developed on Treeincarnation.com website.

And that frequency chart above is at the very
heart of the new material I'm working on here.

About How the Inside Relates to the Outside.

And in doing so - shapes the world we see:

http://joedubs.com/comfortably-numbered/
Last edited by Fintan on Mon Sep 12, 2016 9:08 pm, edited 1 time in total.
Minds are like parachutes.
They only function when open.
Top

Another treasure trove of info and treats, enjoy:

bri : Another treasure trove of info and treats, enjoy:

Introducing the Polytonic Ratios
Circles Inside, Circles Outside
http://www.megageometry.com/2015/08/int ... atios.html 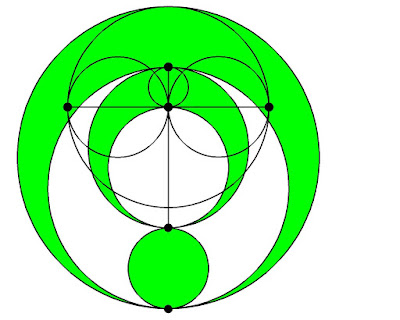 I love this stuff. This is totally my bag. Although I haven't caught up on all of the links so far, I know that this thread really is going to go to the next level and I'm up for the trip. These issues have just about obsessed me for all of my life.

I've often felt that whatever the fundamental principle of "reality" actually is, it must be a form of consciousness itself. That is, an energy form which has awareness or self-awareness as an essential attribute. Lately, I'm more and more inclined to think that this conscious energy has actually manifested the illusion of a material world as some kind of creative exercise in pursuing knowledge of itself and expanding its own creative impulse, something like an artist's sketches which work out ideas before the completed work can be produced. It's almost as if it's taking a break, switching off the lights and stumbling about in the dark for a while just to see what it's like to be unaware.
(I'm sure we've all had moments when we've wondered what it's like to be a dog or a dolphin or a spider; imagine if you could find out by experiencing it for a short while!

)
Okay, I don't think the Great Essential Consciousness is being quite as flippant as that by creating the physical universe, but I do think there's a purpose involved and it has some good reason for putting filters on our human consciousness while we're clattering about in this illusory environment.

It's really hard to set out these kinds of ideas in lines of written language, not least because we don't really think linearly and even more so because the truth certainly isn't linear. Moments of great insight and perception invariably feel as if they expand in all directions and through all dimensions. We simply don't have a method of communication which can transmit that enhanced awareness and the feeling of enlightenment. We do, however, know at a very deep level when we're in tune with the truth, when things all seem to fit and when the fog of confusion lifts for a time.

Music is a hugely significant part of this intellectual and spiritual ascension. Mathematical relationships between the degrees of the scale, numerical relationships that explain why some intervals are consonant while others are dissonant, the pros and cons of various tuning systems which have been devised over millennia; all of these, and more, have fascinated me for decades but way beyond all of the physics of the matter, it remains the case that when there's a beautiful piece of music in my head, it's my spirit that's being energised. (I wonder what kind of entanglement is involved between the consciousness of the composer and the perception of the music in the minds of countless people? )
To a human mind, a great tune makes a kind of sense and speaks a language which is not perceptible to any machine even though it can perfectly reproduce all of the physical sounds of a musical performance. The physical mathematical ratios are real but they're only steps of a ladder which our consciousness ascends to a higher state of being and receptivity.

(As an aside, it saddens me to note that the popular music industry is on a relentless mission to do exactly the opposite - to desensitise people, brutalise their aesthetic tastes and drag them down to a lower level of perception. That's probably one for another day though.)

Anyway, I'm going to stop rambling now and plunge into some of the links that are already up. I look forward to following developments.
My real name is Gerry.
Top

it's all about resonance, baby

what about something practical coming out of this?


if you watch the video
he says he isn't "creating " power, but sets up the circuit that reuses
the power by creating a resonance
formerly known as duane in a previous registration
Top

Has anyone here ever looked into Marko Rodin's work on "Vortex Based Mathematics"?
(Caution: it's over four hours long.)
https://www.youtube.com/watch?v=fI93jeaXGvs

Randy Powell is on a similar tack. (2 hours long)
https://www.youtube.com/watch?v=2eMBw3yiO_4

I'm interested in their ideas about the limitless source of energy that we could potentially tap into but I have no idea whether or not the sums really add up.
It's very interesting though.
My real name is Gerry.
Top

ManAtTheWindow
anyone looked into Rodin's work on "Vortex Based Mathematics"?

I did go through it some time ago and it didn't add up in the end.

On the number stuff, he's likely just unknowingly rehashing old work by
James Clerk Maxwell. Yes it's one spectacular example of how the Base10
number system has wonderful internal dynamics. But there are others.

On the free energy, he's not in the race. There are no compelling
side-by-side tests for his coil winding technique versus others.

By comparison, Jim Murray (see Duaneh post above) is at least hands on
and running a lab which is something approximating to scientific inquiry.

The sad thing is that mainstream science is deeply flawed - yet so few
of it's critics knuckle down to scientifically deconstruct that tissue of lies.


Rupert Sheldrake is one such star who kicks science's ass.

Nature holds experience and structural know-how - built up over millennia
like the layers wrapped round an onion : morphic resonance.

But the "materialist belief system" in science won't accommodate that.

Sheldrake's criticisms of modern science in this censored Ted Talk,
go to the heart of the some of the arguments I will be using to deconstruct
-and then reconstruct- the science of how Mind Matters to Matter