https://www.youtube.com/watch?v=XQNbLs05YDw&t=82s
formerly known as duane in a previous registration
Top

You care to sum up exactly what this is all about?, you know for the dummies ie me.

I couldn't get into the moon being a hologram, but this?. I think I'm just frustrated that I dont get a fucking thing lol.
Top

Having lightly perused the above, it seems we are (still) on the same track; a grand holographic, fractal implosion. Fintan et al are attempting to find significant details; the smoking gun(s).

It appears the Tiamat pdf is mandatory but I haven't read that yet. But I'll add that I saw a clip by Eric Dollard who claimed the Sun was hollow. I just happened to see in that pdf or other quote that one of the theories is just that - many celestial bodies being hollow.

As far as the Moon - it's size as compared to the Sun distance wise - maybe we should at least acknowledge those fringe stores about it being an artificial construct. More than ironic, as far as Astrology is concerned, if true. I mention this tin foil speculation simply because of the Moon's overall affects on Earth and Psyche. It's a celestial body that precludes a uniformity on this planet. This may... be broaching on that mystical adage that "We are food for the Moon."

Lost it but science has found some kind of node points (not Lagrange) between Sun and Earth. This have significance and are newly found and damn I forgot the rest. Think it had something to do with energetic communication twixt both bodies. Or perhaps, locales which can be, well, exploited.

Could've sworn I saw somewhere that this entire model of magnetic flux lines and curls leading to Sun Spots was wholly flawed.

The Youtube video by Theoria Apophasis, as I typed there, seems to reflect Dan Winter's model of coherent, phase conjugate implosion. Does that need quotes?

I've attempted to grok other vids by this guy and I lost. The big however is that he's a slew of detractors with seemingly good arguments. But that particular vid seems self explanatory. It is beautiful, visually and conceptually.

Nice to be here this Sunday morning. I love your speculations Fintan and you make it all very interesting, like some mystery that the Collective Unconscious is dying to get out. Did you get around to making some videos on the above?

Hello dolphin man. Did you ever look into the history of Joan of Arc? Jehanne rather. I'm very interested in these visions and voices she had. Historical records seem to indicate there were no signs, whatsoever, of mental/emotional imbalance.
Top

Hello dolphin man. Did you ever look into the history of Joan of Arc? Jehanne rather. I'm very interested in these visions and voices she had. Historical records seem to indicate there were no signs, whatsoever, of mental/emotional imbalance.

Fintan and JoA share epiphanies if of different orders and magnitudes. You can shed light on any subject and in any direction but it is what you do and how that affects you that counts. I admire Fintan immensely and his free-wheeling, multi-angle approach appeals to my less rigorous (right) side

Truth is flexible and reality is infinite so there is a lot of wiggle-room. Interpretation is a form of revelation so this place is pretty much hallowed ground.
The grand design, reflected in the face of Chaos.
Top

Pardon, another hijack. You mean a kind of, larger picture, freedom fighting? Any other kind, I'd have to assume, would lead to becoming a targeted individual.

I asked you about the Maiden because her story has had an affect on my senses. Dying as a relapsed heretic speaks volumes.

You have a right side?

Peter
Perspective is the mother of perception.

And that's where Kepler scores big.
Like Fuller - his baseline is to understand the nature of space.

This is Killer. Beats the heck out of e=Mc2
This is scientifically, lyrically and holistically aware.
This is why Kepler:

"Thus the parabola has on one side two things infinite in nature—the
hyperbola and the straight line—and on the other side, two things that
are finite and return to themselves—the ellipse and the circle.

"It itself holds itself in the middle place, with a middle nature. For it is
also infinite, but assumes a limitation from the other side, for the more
it is extended, the more it becomes parallel to itself, and does not expand
its arms (so to speak) like a hyperbola, but draws back from the embrace
of the infinite, always seeking less although it always embraces more.

"With the hyperbola, the more is actually embraced between the arms,
the more it also seeks. Therefore, the opposite limits are the circle and
the straight line: the former is pure curvedness, the latter pure straightness.

"The Parabola holds itself in the middle place, with a middle nature."

So I suppose you might call that the mirror plane then Johannes?

That's cute! Nice way to display Em in normal light.
Ol' Theoria Apophasis seems to borrow a lot from elsewhere
and he claims a personal mega geniushood to rival Kepler.

In fact, also check @35mins for a Fuller intersection:

Beauty.
The music of the spheres
Isn't just the sound in your ears
But also the sum of all your fears.
The grand design, reflected in the face of Chaos.
Top

I think this is summed up in the, perhaps Freemasonic, line, "the mystery of line and circle." And of course, both underlie our numeric and alphabetic shapes.

"But also the sum of all your fears."

I call your hologram and raise

Look at that set up! And are you reading too much into this or typing tongue in cheek?

Could be wrong on all that follows. But this seems to point to a potential revolution as far as processing speed and memory storage retrieval so as to get us into sci fi as reality. This fetish with cryptography is tiring

how does this shed new light on the "two-photon interference"? must be more than simply knowing the quality of one photon.

As far as a raise, that line to circle/finite-infinite stuff must have to do with time. That the Article lead me to that idea without having to read any of the above thread. And that time Must be on both "sides".
Top

Peter:
The music of the spheres

Speaking of which, here's a musical presentation
featuring Kepler's orbital harmonics of the planets: 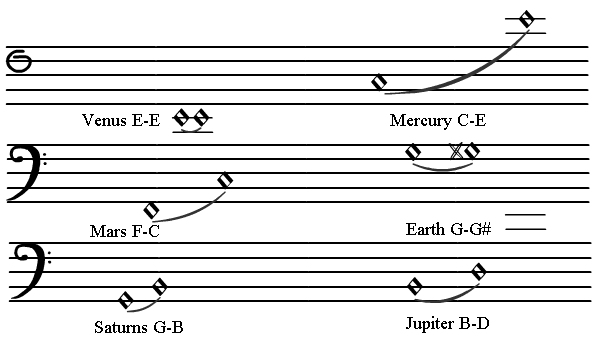 In truth the solar system ranges over 7 octaves, but because of the
limitations of our ears, the sounds that represent the planets have
been divided by octaves so that the proportions are maintained.
This is in accordance with Kepler's principles
by Book III, Chapter I, Proposition I.

There's even a quirky animation
which plays the orbits as sounds! :

CLICK ONE OR MORE PLANET NAMES ON THE RIGHT

By the way, I've no special take on the nature of electromagnetics.
Partly, because it's so done to death - with a plethora of theories.

But also because my focus is on revealing the non-local,
quantum entangled instantaniety: Quantum Holographic.

And this is why the self-similar (fractal) nature of holograms (for information transmission) ensures entanglement (instantaneous communication no matter the distance from one part of the holographic projection) and produces the cyclical temporality of our experience.
Harmonics are "echoes" of these repetitions of state wherein resonance and the amplification of presence is achieved. It all fits together.....because it is all part of a greater whole.
The grand design, reflected in the face of Chaos.
Top
Post Reply
280 posts