Pattern recognition is our strength. From survival to understanding, it precedes discernment but follows awareness.
ALL of these patterns exist because the universe and all its bits are self-similar.
Our response to this realization must not be recursive, only evolutionary. We are the seed that is needed to crystallize the supernatent. Parity-breaking is part of the process and we are the wedge that has been inserted into the matrix.
The grand design, reflected in the face of Chaos.
Top

skinters: I'll read it all again, and see if anything sinks in.

Yeah - it is quite dense.

That's just me condensing a lot of work into a clutch of handy sound bytes.
And finalizing thinking - out loud, so to speak.

So I will be adding audio/video which will put things in a more
straightforward context - and then we can all work on from there.

Not quite, but tending to inevitably veer in that direction

So the benefit of finally actually figuring it out properly, is that
a welcome simplification emerges - one which also enables
cleaning house of various misapprehensions in the mind.

Now I realize they -ARE- different.

Notice that our Earth's North Pole is open water - and the South is
a damn big landmass: Antartica. I used to figure that was just an
accidental outcome of Earth's continental plate tectonics.

This new analysis shows that's no accident and is related to the fact
that the Arrow of Time on the Earth sphere runs from South to North!

Those are the kind of shifts in perspective that have emerged.
More follows....


Peter: Pattern recognition is our strength.


Amen. And recognition is itself made from biological patterns.
We the best damn subtle pattern detectors in the Universe

And let's end with a Tribute to Polar Spheres!

(Tiny spherical magnets. You can make most anything out of them.
Perhaps even an entire Universe!

But you can certainly make
a CubeOctahedron - a structure which helps generate reality itself.

A gravity-defying structure in this video:

About making that Universe from spheres?

Here's how to make the so-called Ultimate Sphere:
(double-skinned around icosahedron vertices)

Not quite, but tending to inevitably veer in that direction

Not a bad thing! My left brain definitely needs some sharpening
Top

Just added a new definition I'd not
spotted to the opening list above:


Sphere Center is to Sphere Surface,
as Division is to Multiplication


The Sphere Metric is Divide Inside To Multiply.

Below is the Sphere - being beautifully Divided.

Here is more on Odom.
I had no idea this guy existed.

THE UNIVERSE
ACCORDING TO MILO WOLFF

Bri: Here is more on Odom. I had no idea this guy existed.

Finding a lot of guys I had no idea existed either.
Ray Tomes above is one. And lots good below. 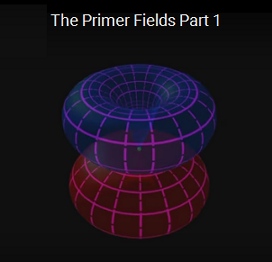 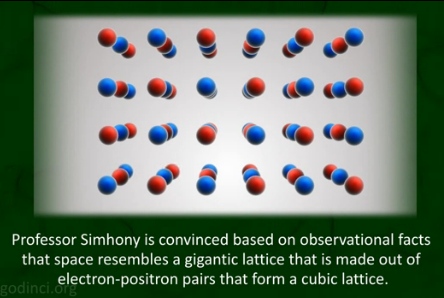 Wealth of stuff there thanks.

Here are a few quick links since the embed thing is broken:

The above animation is pretty damn close to expressing the
relationship between the linear structures of manifest world (illusion)
and the underlying spherical reality generator.

Note that there are two instantaneities in the sequence.
Two pendulum-like pauses - when the action freezes.

It's no accident that our sexual 'junk'
mirrors the IOSphere:

I'm saying that a pause is a point. And vice versa.
A point at the center of a sphere, to be precise.
Like the point I'm getting to, lol.
At the end of this sentence.

And the sphere in the sky?

I suppose you could call that the Black Hole over our heads.
Like many, I was searching the vast distant universe for the
super-massive black hole structure which generates our reality.

Then I found it.

Here.
Right over our heads!

I never expected that.

And that is what this breakthrough is all about.

Here's another animated sequence.
Buckminister Fuller shows us his Vector Equilibrium
The most basic structure of space.

Just as in the case of illusion-reality animation, note that above
there are two instantaneities in the animation sequence.

Yeah Bucky, I get it all now.

Bucky's VE model above shows that pendulum effect.
Those 2 pauses. Two mirrored points.
But only 1 second on the clock of life.
Every ticking second spawns 2 instantaneities.
A moment in life for a multitude; and
a moment in IOne eternal mind.
Your eternal mind.
And mine.

It always seemed to me that those pauses in Bucky's
VE movements had violated some primal symmetry.
So I couldn't accept that.

If Earth was a VE grabbed by the North Pole by Bucky, then
to act like the VE model it would have to spin forwards to the
east for 24hrs - and then backwards west for the next 24hrs!

And of course it doesn't do that, I reasoned - so there
must be something wrong with Bucky's model, I figured. self-lol

In my impertinence I figured that when the VE expands and it's
equatorial arms spin around as they open up - that the momentum
of the VE structure should carry it through the peak expansion and
forwards to contract and close up again. Y'know... Then it would keep
on spinning in the one direction - like Earth does.

I mean it's a valid point.

Of course I finally figured out that Bucky was right. The Vector Equilibrium
arrangement of spheres is a virtual/conceptual structure and has no mass
- thus no momentum to prevent it spinning forwards or backwards. 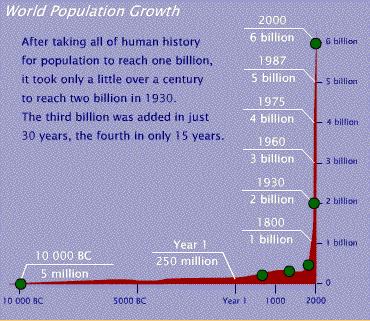 On further analysis -its two pauses are a vital component of its action.
A pause involves coming to a halt - however briefly. And the sudden
decline in speed as the pause point nears, is an exponential curve.
Like a climax; or a crescendo. Life is full of such exponential curves.
Such as, exponential population growth. (The 90degree turn in the
population graph above makes me think: it's precession, ain't it?)

A VE which spins in one direction only - is elegant. But a spin in only
one direction is a violation of symmetry. And lacks a pause. Bucky has
two pauses in his VE - 1 in mind and in 1 matter. He's right.

Day and Night. Love and hate.
Birth and death. These are dualities.
And there are two pauses in any such pendulum.
Two Eyes with which you blend your single view.
Bucky is right.

Radiant lines from a center are as Real as it gets..
But linear, planar reality is merely tangential to the sphere
which is producing that illusory so-called "reality".

Planar rectangles appear in the side of the VE as it expands.
They are the movie screen of illusions spining through time.

Fintan. Ol mate. Fair dinkum!!
Is there an English version for 'dummies'??
I want to understand whats going on here but I am lost brother!!
Your 'illusion/reality' post?? (scratches head)....far out...it was like trying to understand a left handed drunk Russian!

Is there a simple way of explaining this??

Sorry for being unable to wrap my head around this.

Anyone else a bit stumped or just me?

Fintan. Ol mate. Fair dinkum!!
Is there an English version for 'dummies'??

It's quantum f*kn physics, fer cryin' out loud.... :-)
It's not supposed to be simple!
You should see all the other guys' explanations.
Even I can't understand them! :-)

But, srsly - coming back to your comment:
"Is there an English version for 'dummies'??"

Damn right there is - as there should be. Any worthwhile explanation
simplifies things. A breakthrough explanation must do that and more.

It does. Big time.

But a dummies version must condense(or abstract) a lot of these detailed
underlying strands into simple and easily graspable concepts. That way
folks can drill down into the detail to comprehend it all and then verify
the details with their own mental logic engine.

So I'm sorry, but this thread is like my mental workshop out back.

As a teen I stripped down a car engine totally to get at the engine block
- and had an engineering shop re-bore the cylinders for larger pistons.
Then I put it back together. This thread looks like the day I came back
from the shop with the re-bored block. <grin>

So it can be a bit messy. I've unpacked the
Universe here and I'm in the process of reassembling it...

And yeah, there are bits and pieces of theories and angles and the
occasional graphic or animation - spread out on the floor everywhere.

There are also newly minted insights cooling off over there dude,
so don't handle 'em. They are quantum unpredictable and they just pop
out of the logic engine red hot - when you're filing the edges off theories
or buffing up concepts.

Anyway....
All this stuff is going into those video frames
drying in the corner propped up against the wall.

As I said earlier:

Fintan: Yeah - it is quite dense.

So I will be adding audio/video which will put things in a more
straightforward context - and then we can all work on from there.
I do take seriously the issue of presenting this new material
as simply as possible . I'm assembling it all now - so your post
is a very timely reminder to K.I.S.S.:

[youtube]https://www.youtube.com/watch?v=5_ARibfCMhw[/youtube]
Minds are like parachutes.
They only function when open.
Top

http://www.amperefitz.com/
formerly known as duane in a previous registration
Top

Love his stuff. I believe Fintan has posted his stuff here in the past.
That website has weeks,months worth of great reading, and that's just what I could wrap my head around
Top
Post Reply
280 posts