It's happened so quickly and there's been very little
good analysis figuring out what is actually going on......

I've been awaiting it forever.

It started with Trump.

Loyalty to Parties is History.

'Brexit Party' is Proof. From Zero - to leading party.

With Trump the ISSUE was: A FUTURE!!!

And those who wanted one didn't give a fuck who they had to vote for.

Rinse and Repeat on steroids in the UK.

Those who wanted that don't give a fuck who they have to vote for.

Which is making Nigel Very Happy

Issues Rule.
Minds are like parachutes.
They only function when open.
Top

The video below features Farage making the
exact point of my post above, when i said:
Grounding contributions too from the Yorkshire man in the blue cap.

Yes - political parties are history, but let's be very clear, this is a fast changing ENGLISH political landscape - there no longer is any United Kingdom - the UK as we know it is also history!

Scotland is also about ISSUES, well one actually, INDEPENDENCE from the UK Union! ... and the Scots too are becoming weary of the "politics" of the SNP (but I want to post something about that soon on the Scottish Independence thread rather than here

However, I can't quite help but feel these people (essentially old people) are DELUSIONAL ... straight in talking about Bombers in the War, WWII, Blitz mentality ... "What do you watch and read?" - "The BBC ... and The Daily Mail!" !! ffs

Nigel Farage IS a Snake-Oil-Salesman and #Brexit will be very good ... for HIM and the Rich Elite like him ... everyone else is FUCKED! ... especially these poor hapless fools in the video.
Top

The usury banking master criminals who own the B of E/ECB/FED/IMF, etc - and most western governments as well - fear anything that threatens their criminally insane dream of one single world government run by those same central banks and policed by the UN and NATO.

And James, if by "the rich elite" you mean those who have never worked for a living but have become rich as Midas through robbing and killing, aka those I mention in my first line above, those are the ones who hate Brexit.

The real heart of the matter is in Nigel's above interview around 5:00 to 6:15......the master criminals know that the UK will do so well outside of the EU that others will want to follow.......!

Boris Johnson is the clear favourite to be the next prime minister, according to the first poll of Tory members since the start of the leadership contest.

The former foreign secretary is the first choice to replace Theresa May among 39 per cent of the membership. The second most popular is Dominic Raab on 13 per cent, with all the other contenders on single figures.

In a head-to-head run-off, Mr Johnson resoundingly beats Mr Raab by 59 points to 41, and beats every other contender by an even bigger margin.
Mr Johnson would be a divisive choice to succeed Mrs May, however, among a hardcore minority of largely Remain-supporting Tories. Mr Johnson is fifth choice among Tory members who voted Remain in the 2016 referendum, behind Sajid Javid, Michael Gove, Jeremy Hunt and Rory Stewart.

Some 31 per cent of Tory members think he would be a “poor” leader, including 65 per cent of those who voted Remain, and he is less popular in London than the rest of the country despite eight years as London mayor.

Mr Johnson announced his leadership campaign at a private event yesterday, taking his team by surprise. Mr Raab has not yet officially said he is running despite overseeing a leadership operation for weeks.

The poll is likely to prove disappointing for many of those who have spent months discussing their leadership prospects. Mr Gove and Mr Javid, who are considering running but have yet to make formal announcements, are both the first choice of only 9 per cent of the membership.

Nicola Sturgeon, the Scottish first minister, indicated that she would use Mr Johnson’s perceived unpopularity in Scotland to argue for a second independence referendum. “Boris Johnson, the guy who misled people in the Brexit vote, the guy who has only ever put his own interests first as far as I can see — a complete and utter charlatan in my opinion.
“The prospect of him becoming prime minister of the United Kingd
om is, I think, one that will horrify many people across Scotland.”

However, Mr Johnson is seen by Tory members as the most likely figure to win a general election if he became leader, with 70 per cent saying he would be victorious. Some 42 per cent think Mr Raab would win, 39 per cent back Mr Javid and 32 per cent back Mr Gove, with Mr Hunt on 29 per cent.

This is likely to be the driving factor in the contest. Mr Johnson has made clear that he regards himself as the only candidate capable of taking on Nigel Farage.

The poll shows the next leader will be under huge pressure to take Britain out of Europe without a deal. The Tory members were asked how the candidates should approach Brexit. Some 66 per cent called for a no-deal departure as their first option, 13 per cent recommended returning to Brussels to win a deal that could attract remaining Tory and DUP MPs, 12 per cent backed efforts to approve the existing deal and 6 per cent said that the next leader should strike a deal with Labour to get it through the Commons.

More than eight out of ten Tory members oppose a second referendum, even if “no deal” were one of the options on the ballot paper.

The poll makes dismal reading for Mrs May, revealing that 64 per cent of Tory members oppose her Brexit deal, 79 per cent think she is doing “badly” and the same proportion think she should stand down. Some 38 per cent think she has been a “terrible” prime minister.

YouGov interviewed 858 Tory members between May 10 and 16. 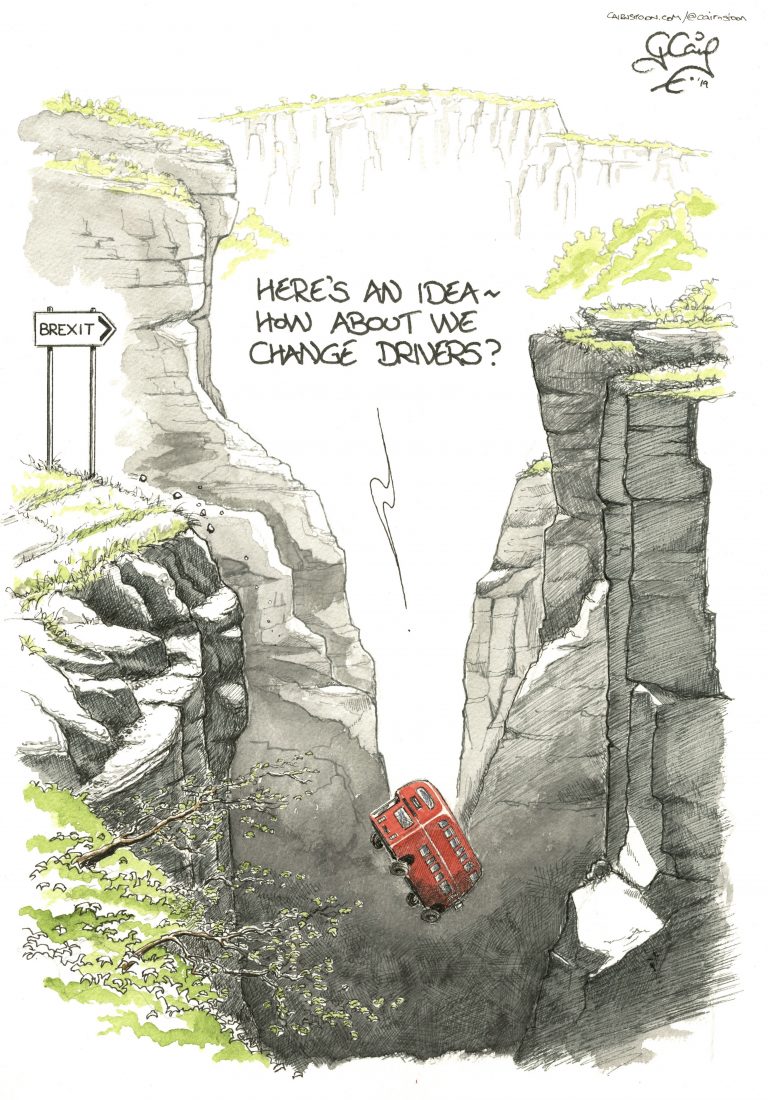 As I have believed all along.
It's still the capital of the world, though we are not supposed to know it.

Since the usury banking criminals own the City of London (Bank of England) as well as the ECB, FED, IMF, etc., what is really going on here?
https://www.marketscreener.com/BARCLAYS ... -28624320/
Top

Nigel Farage on his LBC Radio show after the Big Win.

What is this ca-ca about ending 'free movement'?
There never WAS 'free movement' in the first place.
Anyone entering the UK must go through passport control, and don't get me started about trying to bring your pet dog into the UK (or the Republic of Ireland for that matter)

Details at the link above of the Commons defeat for Boris.

However, Jeremy Corbyn refused the election offer by
Boris on the grounds that it was a poisoned chalice.

Were an election agreed, the government could subsequently
alter the date to the end of October -thus Brexit by default.

More votes are scheduled tomorrow.
Minds are like parachutes.
They only function when open.
Top

So, British politics, eh? We’re basically on strike until things make at least an iota of sense, because there’s no point in attempting political analysis right now when events can overtake you before you’ve finished typing a sentence. 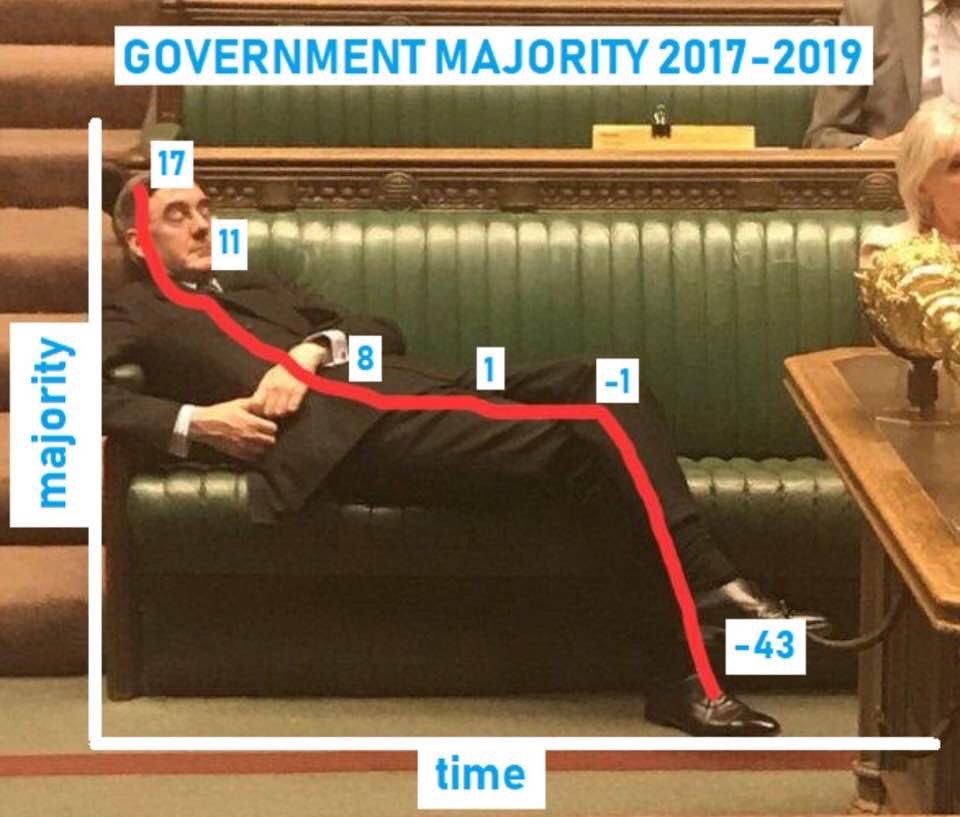 But let’s just have a quick recap on what we know.

– The opposition won a vote last night aimed at preventing a no-deal Brexit by forcing the Prime Minister to request another extension (the third or fourth so far depending how you count) from the EU. The government has withdrawn the whip from all its own MPs who supported the vote, leaving it several dozen short of a majority (and theoretically ending the expensively-bought influence of the DUP).

– Tory peers in the House Of Lords plan to block this legislation by filibustering it. If they fail, the Prime Minister may seek instead to have the Queen refuse to give the legislation royal assent.

– If the legislation passes, nobody knows whether the Prime Minister will abide by it. The government has refused to commit to obeying the law.

– If the legislation succeeds and the Prime Minister is forced to ask the EU for a further extension, nobody knows whether the EU will agree. There’s no obvious justification for it – the UK Parliament has had three and a half years to solve Brexit and failed, it’s not clear how another three or six months would help.

– The Prime Minister claims to be actively pursuing a new deal with the EU. Countless sources within both the government and the EU have revealed that this isn’t true, and that no new proposals to solve the backstop have been offered.

– But having spent the last two years constantly demanding a general election and proclaiming that it would solve all ills, Labour will apparently NOT support the Prime Minister in voting for one (although this position changes from hour to hour), making it highly unlikely that it’ll secure the necessary two-thirds majority.

– This is because the Tories currently lead by 10-12 points in opinion polls and most analysis shows them winning a majority, either alone or with The Brexit Party. However, the situation is so fluid that because of the vagaries of the UK’s electoral system, another inconclusive hung parliament is also a real possibility.

– As far as anyone can tell, Labour’s plan is to try to force a general election but only after the Prime Minister has achieved an extension from the EU. Nobody is very clear on when this prospective election would take place, and in particular whether it would be before or after 31 October.

– Seemingly the rationale for this is that asking for an extension would severely damage the Tories in the eyes of Leavers, and split the Brexit vote between them and The Brexit Party. But the Remain vote is also split between Labour, the Lib Dems, the SNP and others, and significant portions of those parties’ voters actually back Brexit.

– The Lib Dems have refused to participate in any anti-Brexit alliance which involves Jeremy Corbyn even briefly becoming caretaker Prime Minister. Corbyn, as leader of the official Opposition, has refused to step aside.

– Nobody knows what Brexit policy either the Tories, Labour or the Lib Dems would campaign on in any general election. Would there be another referendum? What options would be on the ballot paper? Nobody will say.

– Labour’s stated position (at least the last we heard) is for a vote “with credible options for both sides including the option to remain”, which appears to open up the possibility of a referendum with three, four or more options – meaning that the winning one would almost certainly have secured less than 50%.

– A court in Scotland is currently hearing an appeal on a move to block the government’s plans to suspend Parliament for five weeks, although currently it’ll still be closed for most of that time anyway while all the UK parties hold their autumn conferences to decide what their policies are.

We think those are the basics. We’re off to the park.