Bri:
I've been experimenting with a GARD style diet for at least 5 years

Lol- The Gluten Dude is Classic.

And the irony is that gluten is a fake word!

The myth was that gluten was a specific molecule found in specific grains.
The reality is 100 cereal prolamins of which 40 are toxic and found in
different grains to varying extents.

The next irony is that RoundUp is FAR WORSE than gluten, and yet
people who are gluten-free are unknowingly consuming it in many foods,
including gluten-free cereals.

So all this does not reduce to the "gluten = bad" oversimplification.
The mass awareness is still way behind the curve.

Yeah that's great to hear of your multi-year campaign.
Took me ten years in all to evolve towards zero symptoms.
The mental hook into foods consumed since infancy is very intense.

That's because the brain membrane gets compromised and we get a
serious brain buzz from many of the worst foods or foods in combos.

Persistence wins out - relentlessly. lol
Minds are like parachutes.
They only function when open.
Top

Food for thought there Fintan and sometimes reality is hard to digest.
As for the gluten free products...the devil is in the details.
Good shit though, appreciate the clarity of your response!
Top

4Sure! In an era of mass manufactured food, the devil IS in the details!
Anyway, you're welcome and I'm happy to raise awareness on this, 'cos
I reckon we already lost one veteran forum member due to diet issues.

I'd love to do audio on this but other topics are already queued and
overdue - so to extend all our knowledge on this I'm gettin' systematic
to develop a hit list of stuff to avoid - in ranked order of harm.

We've a good handle on gluten/wheat. But there's two other medical areas
where discoveries by NON-PHARMA diet pioneers will teach us a great deal
about the threats to our gut: one is Chron's disease, the other Autism.

Interestingly, in both cases it's as much about the processing of food as it
is about actual content in the food. Chron's later, but here's the hot skinny
from an Autism pioneer - about HIDDEN nasty shit in modern diets.

If it can do THIS to Autistic people - what's it doing to you? 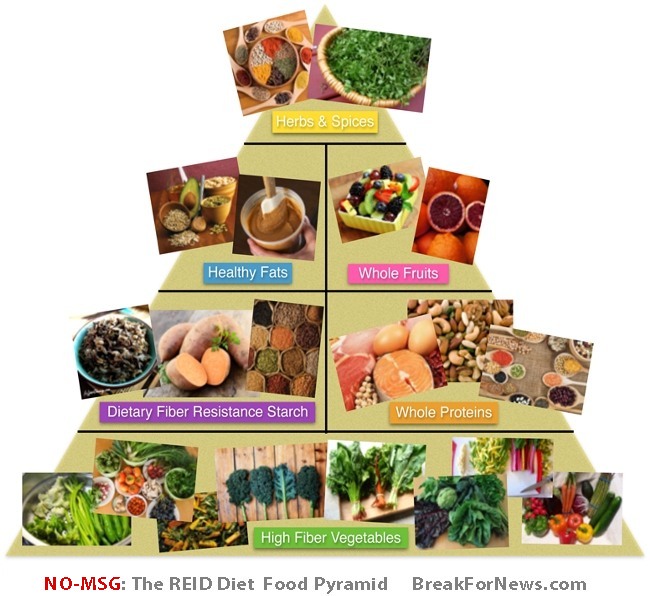 Interview: NERD OUT WITH KATHERINE REID
" Whether people realize it or not, people consuming the Western diet
are reacting in some way or another. It’s sometimes quite ironic when
people will sit there and say, ‘I’m not reactive to MSG,’ but then they’ll
complain about frequent headaches, anxiety, or that they’re 100 pounds
overweight. There are many ways in which excess glutamate manifests
ill effects on people.

MH: Do you think that glutamate is a factor in developing intestinal permeability?

KR: "Yes. We do have glutamate receptors in our intestinal barrier so there
has to be some regulating function there. One of the functions of the cells
in our nervous system and in our digestive tract is to report about their
environment to our brain and to the rest of the body.

"These cells (glial cells) report on the gut environment by releasing signals
from its cells, and one of its signals is glutamate. So if it senses a stress
response, like inflammation from glutamate itself, it releases more
glutamate to send the stress signal throughout the body.

"Then the glial cells, which are the cells that are responsible for protecting
the intestinal barrier, start to die off. So you can get permeability because
of the inflammation associated with excess glutamate levels. Glutamate
levels and inflammation are directly correlated. Glutamate initiates the
inflammatory response."

"We have an epidemic of glutamatergic excess and disfunction, from
Alzheimer’s disease, Parkinson’s, and multiple sclerosis to diabetes-related
issues. There are many scientific studies demonstrating the links between
excess free glutamate and these diseases, but most of these studies don’t
hypothesize as to where the excess glutamate is coming from. To me
there’s no mystery of where this glutamate excess is coming from.
Let’s not be silly — it’s coming from the food. "

Great post, Fintan, and I'll second the content from personal experience (which I'll tell you more about in a PM.)
My real name is Gerry.
Top

#ROUNDUP AND #GLUTEN IN SYNERGY
ARE DESTROYING YOUR GUT 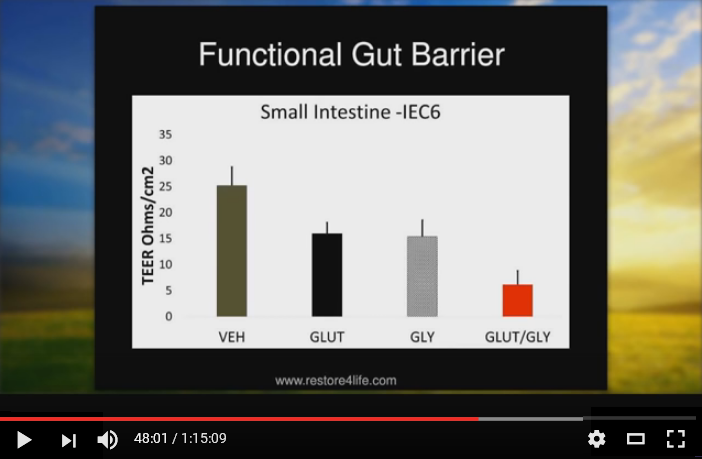 
Why so many are sick these days?
Is it what we're eating?
We eat lots of wheat(gluten).
Thanks to Monsanto we eat lots of Roundup also.

Look at the red bar in the graphic above.
That's what Wheat+Roundup does to your gut.
Go Roundup free. Cut back on cereals.
Go Gluten free. Ditch wheat.
Get Well.

Watch Video Above for Key findings on Gluten and Roundup Synergy.

The root cause of the Western Plague of autoimmune/gut-driven diseases.

In the second video below you will discover the subtle understanding
Dr. Zac has about gut function and its life-threatening impairment by
a destructive synergy between Roundup and Gluten.

Is going gluten-free giving you diabetes? New study links diet with the disease
formerly known as duane in a previous registration
Top

Thanks for those two heads-up guys!

That Gluten is Good article is such a misleading crock.
The headline findings are about protein - not gluten at all...!!


"A major study by Harvard University suggests that ingesting only small
amounts of the protein, or avoiding it altogether, increases the danger of
diabetes by as much as 13 per cent."

WTF. Protein? I thought this was about gluten?

Yeah it is: buried down the article
are the laughable results:


They found that most participants had a gluten intake of below 12g a day,
which is roughly the equivalent to two or three slices of wholemeal bread.

Within this range, those eating the highest 20 per cent of gluten had a
13 per cent lower risk of developing Type 2 diabetes compared with
those eating up to 4g a day.

So people who eat 3 slices of gluten bread a day have
slightly lower diabetes than those who eat 1 slice a day.

Well, we don't know.
They didn't look at that.
So the findings are useless.

No point in lowering diabebes risk by raising coronary heart disease risk.
Anyway, who can have confidence in such a sloppy piece of work.

Interestingly, this is one of a slew of articles dissing avoidance of gluten.

If I was Big Wheat, I'd make sure I greased some palms to achieve this.

And the other article about hookworms:


There’s currently no cure or effective treatment for coeliac disease
– other than avoiding gluten entirely – but some of these symptoms
appear to be mitigated in patients who host hookworms, and scientists
have been trying to work out whether the parasites could be part of an effective treatment.

Well if you really want to quibble, there is a cure. Re-mineralization of the
gut to enable bacterial communication. See Dr Zac in the posts above.

"scientists have been trying to work out whether"

Meaning they still have damn all conclusive findings.


In the previous study, gluten-intolerant participants were infected with 20 hookworm (Necator americanus) larvae. During the course of the research, the infected participants were given gradually increasing doses of gluten, starting with only one-tenth of a gram daily and progressing incrementally to 3 grams, at which point they could eat their way through a medium-sized bowl of spaghetti – a serving that would have previously induced diarrhoea, cramps and vomiting.

Thanks to the presence of the hookworms, which researchers believe secrete a protein that has anti-inflammatory properties, the discomfort and illness that gluten usually causes for coeliacs was reduced – and the new study intends to ramp up the gluten intake to the point where patients are eating a regular diet (including normal levels of gluten) without any problems.

Now ask yourself.....
why the flying FUCK a celiac person would WANT to eat gluten!!!???.

So they could live a normal life, dummy.

Eating gluten is normal then is it?

Well, you need cereal for your food pyramid.

'Cos the big cereal lobby made sure of that.

Final note: Doctors miss up to 9 out of 10 celiacs.
Only finding out they were celiac at post mortem.

Real research and real thinking are rare in this area. Beware.
Minds are like parachutes.
They only function when open.
Top

Monsanto Colluded With EPA, Was Unable To Prove Roundup Does Not Cause Cancer, Unsealed Court Docs Reveal
formerly known as duane in a previous registration
Top

Quick tip for another common issue besides the gut...

Thoughts that don't quite compute...that damn tip of the tongue thing. "ADD"

Tired for no fecking reason at all. Almost slurred speech stone sober.

The solution is Selenium! At least it worked for me.
I might try a doctors visit, just to get some tests and see what's up.
Yeah though...I just eat a couple of Brazil nuts a day and the occasional selenium pill pop. Feeling worlds better!
Top

Got it.
Damn essential is selenium.
With many vital epigenetic effects:


Epigenetic effects of selenium and their implications for health.

Speckmann B1, Grune T.
Alterations of epigenetic marks are linked to normal development and cellular differentiation as well as to the progression of common chronic diseases. The plasticity of these marks provides potential for disease therapies and prevention strategies. Macro- and micro-nutrients have been shown to modulate disease risk in part via effects on the epigenome. The essential micronutrient selenium affects human health outcomes, e.g., cancers, cardiovascular and autoimmune diseases, via selenoproteins and through a range of biologically active dietary selenocompounds and metabolism products thereof. This review provides an assessment of the current literature regarding epigenetic effects of dietary and synthetic selenocompounds, which include the modulation of marks and editors of epigenetic information and interference with one-carbon metabolism, which provides the methyl donor for DNA methylation. The relevance of a selenium-epigenome interaction for human health is discussed, and we also indicate where future studies will be helpful to gain a deeper understanding of epigenetic effects elicited by selenium.

Good stuff Fintan. 2006 was he year I joined the forum! Fuck!

These guys are total bros, but I liked this, even with the 'hey dudes let's make money' things going on. They won't anyway, especially with new youtube rules. Reap the info! (for the record fuck youtube)