Grainy smudges vs. crystal clear jets: Why do U.S. satellites work in Syria but not Ukraine?


The Ukraine crisis has been almost completely removed from the focus of the mainstream media. There are some contributions from time to time, like the one in connection with the UN General Assembly, where the Ukrainian President Petro Poroshenko, who was elected after the coup d'etat, delivered an expectedly Russophobic speech. 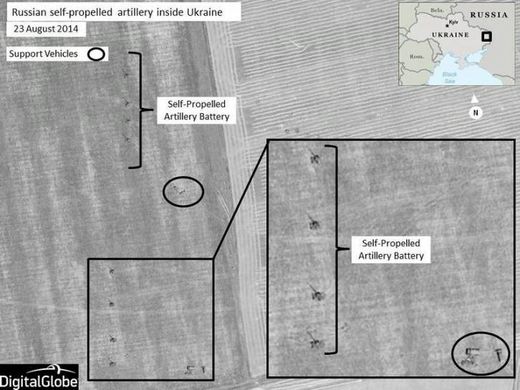 One of the best images of “Russian equipment” in Ukraine…


However, over the last few days, Syria is very big news in the western press. Russia has commenced massive weapons and humanitarian deliveries to the Syrian government, something that has become indisputable. On the one hand, even the Russian President Vladimir Putin has admitted to it repeatedly, most recently during the CBS interview. On the other, there is meaningful evidence from satellite images of the Syrian airport Bashar al-Assad, located in the seashore town of Latakia.

The remarkable thing about that, especially when contrasted with 'reporting' of the Ukraine crisis by the western press, is how quickly tangible evidence became available, in the form of highly resolved satellite images of the Russian interventions in Syria. The first rumours surfaced at the end of August and beginning of September, seeded by the Israeli news papers Ynet and Haaretz. Proof was not available back then, and the intervention was dismissed by many commentators - even by the "Saker" for example, who regularly publishes geopolitical analyses regarding Russia.

Several sources published satellite images of the Bashar al-Assad airport on the 20th of September, made by the GeoNorth company. The image from the 19th of September, showed four Russian multi-role Su-30SM fighters, followed by later images, showing in great clarity in high resolution, Su-25 ground support bombers and the interceptor fighter Su-24. Besides those, there were also images of Russian infantry fighting vehicles of the type BTR-82 and the main battle tanks T-72 or T-90.

Nothing comparable was presented last year during the western media hysteria, which spoke in almost daily unison of a Russian invasion. Instead, only rough-grained, black-and-white images of supposed Russian positions were shown, from which it wasn't possible to recognize what was shown, or where the images were taken and to whom the equipment actually belonged. 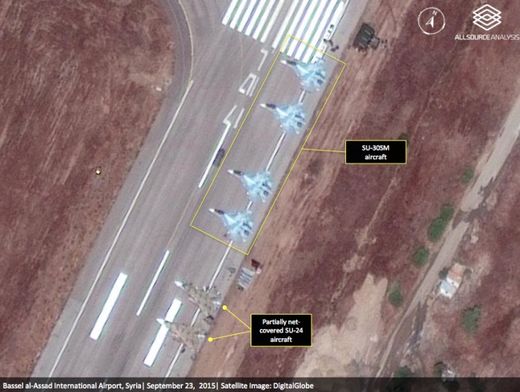 and now in Syria.

More: Islamic Holocaust: Western wars have killed AT LEAST 4 million Muslims since 1990
"Now water can flow or it can crash. Be water, my friend." - Bruce Lee
"Three things cannot be long hidden: the sun, the moon, and the truth." - Buddha
Top

Reveals new and earlier unknown details and focuses on inconsistencies
in the official investigation. The film is based on original documents from
the Ukrainian special services and exclusive interview of the eyewitnesses.

The evidence shows that MH17 was conducted by the special services of
several states -especially British intelligence.
Minds are like parachutes.
They only function when open.
Top
Post Reply
75 posts