Just came across this guys:

We already know China has developed its own chipset. We know chinese scientists involved with this tech (and other scientists who had tons of US drone technology stolen when a group of Navy SEALs were ambushed and slaughtered in Afghanistan) were on the ghost flight. The only way to make it disappear is to use an AWACS system. But cloaking multiple frequencies becomes problematic. They forgot about jamming the engine upload signals.

US microchips Intel and AMD will be replaced by domestically-produced micro processor Baikal in a project worth dozens of millions of dollars.


Russia’s Industry and Trade Ministry plans to replace US microchips Intel and AMD, used in government’s computers, with domestically-produced micro processor Baikal in a project worth dozens of millions of dollars, business daily Kommersant reported Thursday.

The Baikal micro processor will be designed by a unit of T-Platforms, a producer of supercomputers, next year, with support from state defense conglomerate Rostec and co-financing by state-run technological giant Rosnano.

The first products will be Baikal M and M/S chips, designed on the basis of 64-bit nucleus Cortex A-57 made by UK company ARM, with frequency of 2 gigahertz for personal computers and micro servers.

The Baikal chips will be installed on computers of government bodies and in state-run firms, which purchase some 700,000 personal computers annually worth $500 million and 300,000 servers worth $800 million. The total volume of the market amounts to about 5 million devices worth $3.5 billion.

They have now started searching in another area altogether,


A new search area for the missing Malaysian plane has been announced by the Australian government after further analysis of satellite data.

The search will now shift south to focus on an area 1,800km (1,100 miles) off the west coast of Australia, Deputy Prime Minister Warren Truss confirmed.

Flight MH370 vanished en route from Kuala Lumpur to Beijing on 8 March with 239 passengers on board.

Officials said they believed the plane had been on autopilot when it crashed.

A 64-page report released by the Australian government concluded that the underwater search for the plane should resume in the new 60,000 sq km area.

An extensive search of the ocean floor was conducted in April after several acoustic pings, initially thought to be from the plane's flight data recorders, were heard. However, officials now believe the pings were not caused by the plane.

"It is highly, highly likely that the aircraft was on autopilot otherwise it could not have followed the orderly path that has been identified through the satellite sightings," Mr Truss said.

http://georesonance.com/20140630%20Press%20Release.pdf
formerly known as duane in a previous registration
Top

For the umpteenth time!

And a picture of a Hercules. I get it.

The more I ram Diego Garcia through your thick heads; the more I get ZERO back, the more I'm assured that I AM RIGHT. 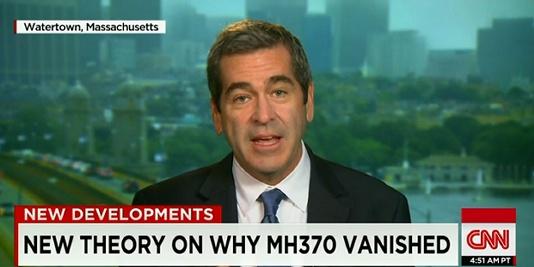 The only reason I can see for CNN airing this theory, is the plausibility
of the notion that MH370 was put under remote control.

By pointing out that an unlocked hatchway can provide access
to a patch point which could enable plug-in remote control....

CNN is laying a red herrring which diverts us from ANOTHER
means of getting remote control of Boeing 7 series aircraft. How?

By using Boeing's own undisclosed software port which allows
the aircraft to download a new flight plan via a comms relay.

No need for physical human involvement onboard MH370.

Whereas CNN want us thinking : humans and hatches.
Minds are like parachutes.
They only function when open.
Top

Has a passport, oh sorry I mean a reference number...

Police on the island of Réunion are examining what appears to be a piece from an aircraft found washed ashore, amid speculation that it could be wreckage from the missing Malaysia Airlines flight MH370.

The piece of debris, which appears to be part of an aircraft wing, was discovered on the French Indian Ocean island on Wednesday.

The Boeing 777 disappeared on 8 March 2014 travelling from Kuala Lumpur to Beijing with 239 people on board.

An international search operation found no physical clues, but an ongoing search has been focusing on the southern Indian Ocean west of Perth, Australia, based on faint signals picked up by satellite after the plane went missing.

A French aviation specialist, Xavier Tytelman, who was sent the photos by a contact on Réunion has highlighted the similarity of the debris to the flaperon – part of the wing – on a 777 plane, but other experts have expressed doubt whether the part is large enough to have come from a wide-body passenger airliner.

One UK-based air accident investigator, David Gleave, said that it was a potentially credible lead, with a plane crashing on water likely to have left this type of debris: “I have always said that a ditching was likely to lead to some trailing edge parts of flaps floating but they are too small to spot easily. The drift with time is credible.”

But he warned against a possible hoax, with similar parts available from aircraft scrapped for spares. Greave also queried the colour of the wing fragment, which would usually be grey rather than white, although he said sea salt deposits could be responsible.

While searches for debris on the Australian coastline have proved fruitless, online modelling from the University of New South Wales suggests oceanic currents could in 15 months carry wreckage from the MH370 search zone as far as Réunion, off the eastern coast of Africa.

The two-metre-long part had a reference number, which should help investigators quickly conclude whether there is a possible link.

Malaysian authorities in January declared that all those on board were presumed dead. An Australian-led team has been conducting an underwater search of a 120,000 sq km zone in the Indian Ocean for over 500 days.

Boeing said it remained “committed to supporting the MH370 investigation and the search for the airplane”.

Was just about to post the same article Robert.


Island of Réunion
https://www.google.ca/maps/place/Reunio ... 044m/data=
"Now water can flow or it can crash. Be water, my friend." - Bruce Lee
"Three things cannot be long hidden: the sun, the moon, and the truth." - Buddha
Top

And probably the passport joke too.

Fintan will have the tidal current analysis shortly.


(Let's keep vigilant for inconsistencies for those who RIP)

Australian oceanographers are puzzled about the lack of debris
from missing plane MH370, writes Jonathan Barrett.

The original ocean drift models released by the government suggested
the first debris from the plane would come ashore in West Sumatra,
Indonesia, after about four months. That would have been July.....

It is not clear which "splash point" the government used to come up with
that calculation, but University of Western Australia oceanographer
Professor Charitha Pattiaratchi says it must have been wrong.

"That's an impossibility," Pattiaratchi says. "The currents would never
take debris to Indonesia."

The above is an article from March of this year mentioning oceanographer
Prof. Charitha Pattiaratchi's disagreements in the early Fall of 2014 with
the official tidal drift predictions about MH370 wreckage.

So, for what it's worth, in the past Prof. Pattiaratchi
was seen as an outsider's independent view.

So maybe it's just good damn work that the direction and timing
of this wreckage coincides with Pattiaratchi's earlier predictions: 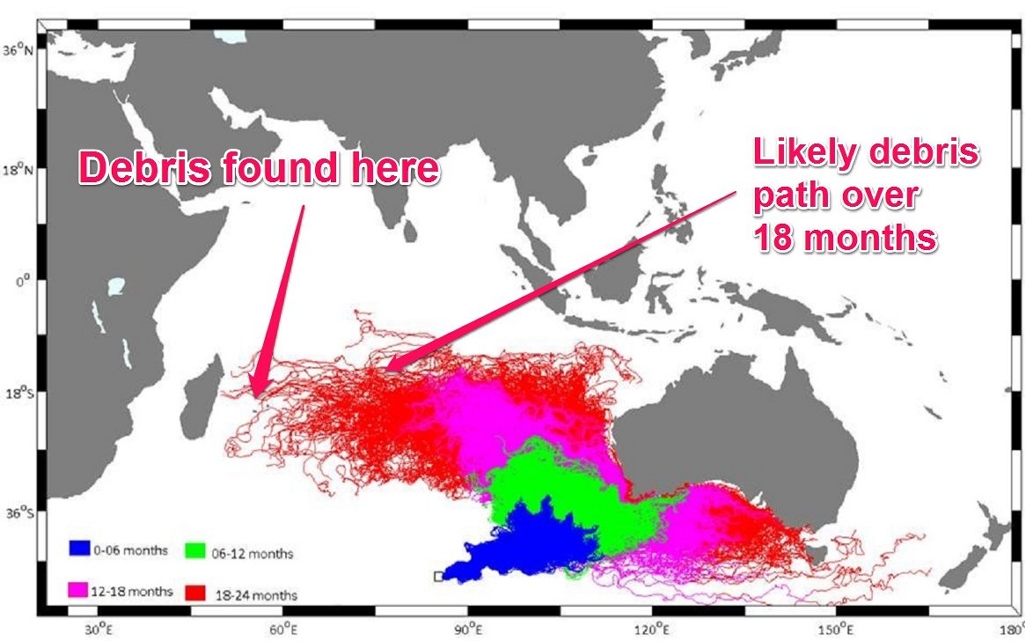 A detailed oceanographic map has surfaced that predicted 12 months ago that any debris from the missing Malaysia Airlines flight MH370 could wash up where a large piece of aircraft wing has been discovered on Reunion Island near Madagascar in the Indian Ocean.

The map was prepared last year and predicted the various possible paths of debris if MH370 did indeed crash into the water in the Southern Corridor, the vast area of the Indian Ocean that became the focus of international search efforts in the months after the plane disappeared.

Charitha Pattiaratchi, professor of coastal oceanography at the University of Western Australia, said on Thursday that the discovery of the flaperon — a hybrid between an aileron and a flap — fit exactly with his models for debris distribution.

The map, which Pattiaratchi provided to Business Insider, shows where the debris would spread over various time periods, and Reunion Island is at the end point where the model says debris would travel after 18 months. It has now been over a year since the plane disappeared on March 8, 2014, while flying from Kuala Lumpur, Malaysia, to Beijing. It had 239 passengers and crew on board.

"It makes sense based on some of the modeling we did 12 months ago, that some time with 18 to 24 months after [the crash] this could be the area the debris would have ended up in," Pattiaratchi told The Guardian.
http://uk.businessinsider.com/oceanogra ... und-2015-7

- whether the debris is from MH370 at all. And even if it is,
- whether it was planted there to bolster an official story line.

It's hard enough to predict where random drifting would lead.
And it's impossible now to reliably determine the origin in reverse.

And there's still way too much missing wreckage and debris.

Pointing to a relatively intact landing - not a crash dive.

Preferably --from a perp POV-- over some real deep water.

Yes that's assuming it landed over water at all. But why not?
"Out of control plane ends up over remote waters",
is a propaganda line which works consistent with
the 'crazy pilot' meme anyway.


Btw/ There's a neat graphic presentation at the end of
the above article which I can't easily reproduce here.