1.
Hands down the clearest explanation and proof
that banks actually create money out of thin air @ 5:36

2.
The explanation for the success of the local bank
German financial system and why it is the answer
to national growth and prosperity.

That is indeed a superb summary, as clear and concise as anyone could hope for.

Here's a link to the full episode from which this excerpt was taken.

But the fact remains that Germany is no longer a nation, since 1945, and is merely an occupied territory controlled by the usury criminals and policed by the American army.
Last edited by MichaelC on Tue Jun 26, 2018 2:20 pm, edited 1 time in total.
Top

MichaelC wrote:But the fact remains that Germany is no longer a nation,

I see this key fact repeatedly attacked claiming "Hitler was a Rothschild" and all kinds of other fiction, one thing for sure - how they reinvented themselves and what they accomplished in the 30's is/was quite breathtaking. But of course, can never be applauded.

They did this, of course, knowing full well that Wall Streets Banks were exploding the Soviet Union's GDP by at least 8 times its size in preparation for destroying Germany, but of course, everyone knows it was those pesky Germans that started it.
Pour apprécier la vie, il faut contempler la mort
Top

Some points Richard Werner stresses about Germany is their small firm (SME) performance is the secret of 200 years of strong economic performance.

No other country has so many SME market leaders.
Why, because of Community Banking.

He says also that now the truth is coming out of big bank money creation, they are preparing cybercurrency, a cashless society so we don't insist on community banks.

The Bank of England has already prepared its implant with digital currency chip under the skin, this is why the elites are now pushing Universal Basic Income, it is the bribe to accept the microchip.

So here's Prof. Steve Keen, with a:


Based on the principles outlined in Steve Keen's presentation,
all we need is a way for the State to reinsert itself back into the
money game from which the NWO's neoliberalism had ejected it.

Such as this new initiative in Italy: 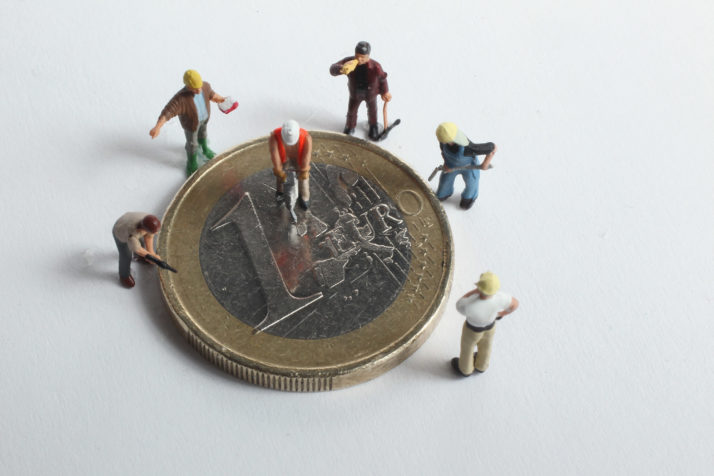 A parallel currency for Italy is possible

Rome can regain control of its monetary policy
without breaking the rules of the eurozone.

In Joseph Stiglitz’s recent article for the POLITICO Global Policy Lab (“How to Exit the Eurozone,” June 29, 2018), the Nobel-prize wining economist proposes that Italy issue a parallel currency as a way to retake control of its monetary policy.

It’s an insightful idea, and one worth exploring. However, Stiglitz is wrong when he suggests that “introducing a parallel currency, even informally, would almost certainly violate the eurozone’s rules and certainly be against its spirit.”

Our organization — the Group of Fiscal Money — has been very active in developing and promoting such a dual-currency scheme. We call it “Fiscal Money” and believe it could be used to avoid the uncertainties of exiting the euro while allowing Italy to recover economically without breaking any EU rule.

Our proposal is for government to issue transferable and negotiable bonds, which bearers can use for tax rebates two years after issuance. Such bonds would carry immediate value, since they would incorporate sure claims to future fiscal savings. They could be immediately exchanged against euros in the financial market or used (in parallel to the euro) to purchase goods and services....

The Facts of Modern Monetary Theory

At the demise of empire, City of London financial interests created a web of secrecy jurisdictions that captured wealth from across the globe and hid it in a web of offshore islands.

Today, up to half of global offshore wealth is hidden in British jurisdictions and Britain and its dependencies are the largest global players in the world of international finance.

Congress appropriates, the executive branch enters into contracts, contractors send invoices, and the Treasury pays the bills by directing the Federal Reserve as the government's fiscal agent to settle the accounts.

The Fed credits bank accounts in the payments system with its own liabilities (reserve balances) and directs the banks to credit their customers accounts on their books.

This is how the government issues currency through spending.

Transfer accounts and interest payments are pre-appropriated, so the Fed just issues the necessary currency to cover the government's requirements. It's all "free money" for the currency issuer, which doesn't need to obtain its currency and logically can't obtain it since it is all issued by the government. John Maudlin is seriously confused about this process.

What about bank created money?

When a bank creates money (M1) by extending loans and crediting deposit accounts, it is not issuing currency. The bank must obtain vault cash from the Federal Reserve to meet demand at the window and it does this by exchanging funds from its reserve balances at the Fed in the payments system which are credits on the Fed's books, which can only be created by the Fed.

Similarly, if a bank customer writes a check to the US Treasury to cover a tax liability the bank has to settle that in the payments system using credits in its reserve account at the Fed that only the Fed can create.

This is what the government as monopoly issuer of the currency as its unit of account means operationally.

That's as simple as it gets.
Bankers are parasites on the general public.
Let bankers and business do their thang, no problem.
We the people will issue our own currency and make the big decisions.

Not some fucking bunch of bankers.

Bill Mitchell is kick ass, hardcore MMT.
Stephanie Kelton is good handling mainstream
Bernie got Sanders on board for his failed presidential bid.
Didn't frikking listen to her though.


Modern Monetary Theory Is Not a Recipe for Doom

There are no inherent tradeoffs between fiscal and monetary policy.

This guy is very sharp, watch all 6 lessons

@ 19mins See the difference between Steve Keen and Michael Hudson

Strange that they focus on private debts, which are consensually entered into and accepted by both parties..... except for private debts assumed by banks who then expect taxpayers to make good on them when they default, aka 'bailout',,,,all those "too big to fail" should be allowed to do so!

But they skim over a big problem: Pubic debt, aka "national debt".
"National debt" is NOT consensually entered into except by the usury bankers and their stooges in pubic office who have conspired to make unwilling debt slaves of billions of people.

Stacy and Max are entertaining but they leave a lot out.
Michael Hudson hints at the only real solution: cancellation of all non-consensual 'debts', i.e., all "national debts". And allowing ALL "too big to fails" to sink or swim on their own with no government aid.
Which, sadly will never happen because the usury banking criminals will send in their own private 'debt collectors', better known as the US military, the UN, or NATO to foreclose entire countries.
Top
Post Reply
179 posts