Laurel & Hardy and The Masonic Liars

How are ye lads and lasses!


Now that the ‘Milton Malbay Shakes’ are out of me system, let us begin…

Well, well, well: it’s been a year since I wrote any kind of analysis of matters Irish and their significance beyond ‘that most Ancient Isle’.

I suppose a spot of contextualisation might frame things better for ye.
In 2014 I came out of 10 years full-time work to once again freelance. As a result, matters financial and logistical have superseded my erstwhile lengthy and more regular posting.

2013 was the year of getting involved, since that was the very year the worm turned in Ireland. On October 4th 2013, the Irish people rejected the Government’s plan to abolish the Senate. That was THE turning-point: perhaps revenge for the 40-year 64-billion euro debt millstone of February 7th that year?

Something happened in 2014 though. Partly out of frustration at the lack of progress and sensing some co-optation (more anon…), but mostly out of an instinctual return to the misty and megalithic past, I started to stand back, observe and wait.

Oh and what an education that has been…

On April 22nd 2014, a small housing estate called Ashbrook in Togher Cork City (through which the ‘Liberty’ stream flows…), rose up against Irish Water and forced a compromise on the installation of water meters.
This then spreads nationally.

Suddenly in June 2014 the ‘Right to Water’ organisation appears out of nowhere with a ready to go manifesto (actually out of the Mandate Trade Union headquarters in Dublin).

It then rapidly proceeds to co-opt the anti-austerity movement and community groups under a pre-prepared umbrella organisation with serious financing.
(I saw the rigs they used last summer in Dublin and these guys don’t come cheap- http://www.eqaudioandevents.com/)

And yet, most interesting of all, is the personage heading up this organisation, which has, as of August 2015, morphed into ‘Right to Change’, since infiltrating 105 of the 552 candidates in today’s General Election.

In 2000 he helped wreck Ireland’s freight rail system by staging a vexacious and unpopular strike through the union IDLA.

What no one can argue against is that since his tenure at IDLA, freight rail in Ireland is over. And those former rail depots have become prime residential real estate…

But why has Right to Change taken over the anti-water charge movement? Well, to sabotage the grassroots movement against austerity by subsuming it into pre-existing structures such as the Trade Union movement. This after all, is a long-practiced European-wide political tactic. Oh and a guy called Obama might be familiar to ye too…

This was a setup from start to finish. Its goal? To steer the debate away from austerity and into the realm of what constitutes legitimate protest. No longer about the what or the why but the how… JFK, 9/11 Psyops anyone?

Throw in a nice dose of emotionalising visual stimulus such as this, with the added bonus of supplanting police reform with an ‘us versus them’ mentality…

Can you feel it yet?
Bear in mind that the majority of Irish Police Senior Leadership are FBI-trained, hence COINTELPRO-literate…

I am not back this week to vote but my local TD Clare Daly will sail back into the Dáil anyway, with or without my help. Instead, I’ll be in Dublin for a week at Easter for the centenary of the 1916 Easter Rising.

It’s win-win in the end really.
If there is an FG-FF coalition, that will be the final nail in the coffin for the current political system. No one can take it seriously anymore.

FG/Labour with support from the Independents’ alliance is a game of numbers and unstomachable, as well as unstable in the medium term.

Sinn Féin/Smaller Groupings would have to prove their worth to the electorate through serious political reform, plus return of sovereignty to Ireland. For me, the jury is still out on this one. If they abuse the trust of the public, the entire system is at risk: you cannot revolve people back to it after that.

The real question is, given what’s happened in the last 2 years on the ground, what will happen outside of the electoral system in the next 5?

Of all the groups I track, this is the one that has the broadest implications for how things are done. Why? Because it resonates on that most basic human, i.e. apolitical level. It’s about right and wrong.

Meet once again ‘Integrity Ireland’ with their 2016 update-

Ireland is administered locally by a Mafia State within a State.
With enough concerted pressure, I see that Mafia turning on itself.

In the meantime, we have to deflate the overcentralisation of power by localising it ourselves. We must be our own saviours and quit externalising our hopes through others. DIY. Only then will we evolve.

While we wait for that to happen, there are larger natural forces at play, namely the spectrification of opinion and the fracturing of ideology.

That is, there are more and more shades of grey within societal opinion as well as pick and mix belief systems.

Ballyhea says No is a perfect example of this. It holds the centre ground, defeating neo-liberal opinion through reasoned argument and the human touch, an unstoppable tactic when deployed against a psychopathic system.

That and some Bardic poetry-

This is the future folks, not the mirrored diatribe of Brendan Ogle, Paul Murphy and other witting or unwitting agents of the Mafia State…

Yes the general election today will see some change, however we humans have 1,825 days or so in the meantime to play havoc with the existing system, through an ever-diversifying tactical base.
We need all sorts to make this corrupt system unworkable in a calm assertive fashion, while slowly replacing it.

Whether it’s time-banking or MMT, direct democracy or the Law of Human Decency, we need to break out of the fiscal strait-jacket of the election cycle. And no external organisation will do it for us. When it really comes down to it, only you can change the world, through the mindscape of the heart.
Picture society as interacting spheres, a network of ideological entrepreneurs sparking off human evolution.

And sometimes in evolution, a species must die and/or mutate sideways in order for the next version to appear.
That species, the Irish political system, will die tomorrow.

The knife is already buried to the hilt these past 3 years:
we just don’t know yet when the funeral will take place…

That date is up to us.

The real question is: what will the new species be and act like? 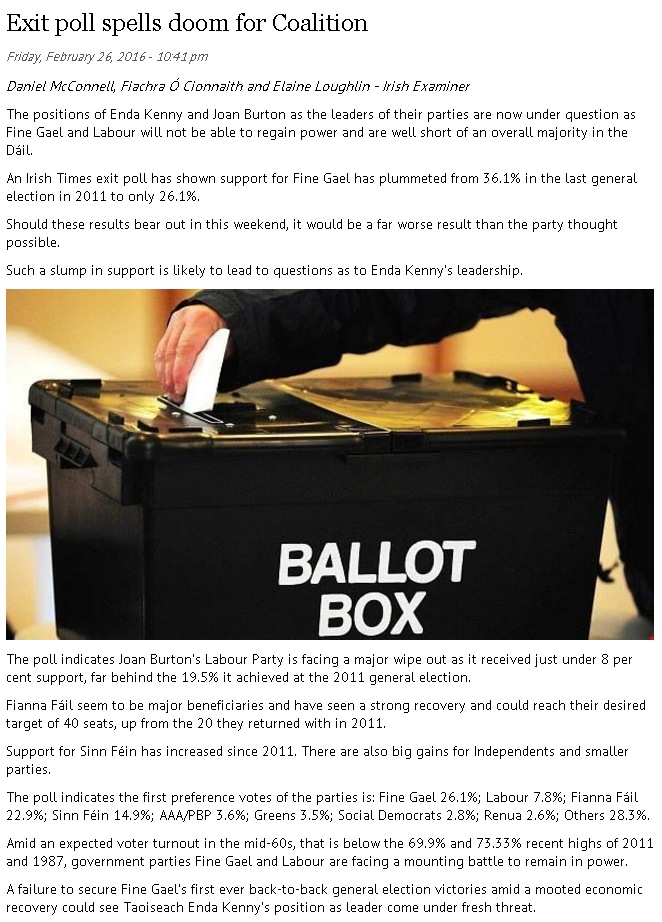 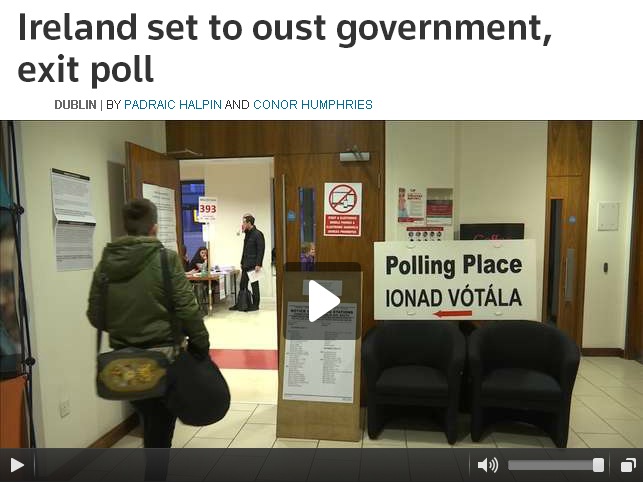 07:29
Michael Marsh says the only age category where Fine Gael and Fianna Fáil have a majority, according to the exit poll, is the 65 and over group - "They seem to be fading".

Their 16-34 age category results are the lowest, whereas Sinn Féin/Smaller groupings are at their highest level among the younger generations.

A FG/FF coalition is being talked up but that is a serious mistake and solidifies the scenario of 'The Old and the Elite at war with the Young and the Poor'...

Bang on the money Dude!

Those results are candy for the eyes
music to the ears and food for the soul !

My mature reactions to follow, but for now a certain
adolescent jeering and shouting abuse at TV screens
seems to be in order!! :-)

In most cases - not only assholes but yard bullies and idiots as well!?

So excuse us this kind of reaction:

https://www.facebook.com/TallaghtSaysNo ... 3082707455
Minds are like parachutes.
They only function when open.
Top

Results are coming in hot and heavy now
as counting rounds get close to their end......

A lot of school bullies are getting dumped!

Would You Buy A Used
Country From This Pair? 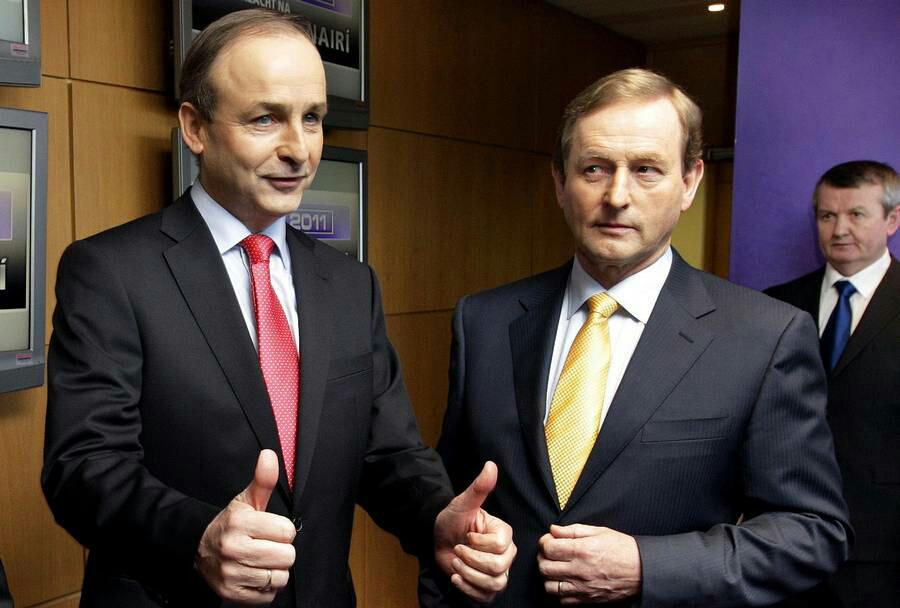 Prime Minister Enda Kenny says voters have clearly rejected his 5-year-old coalition with the Labour Party, but as leader of the largest party he will remain in pole position to form the next Irish government if a different cross-party partnership can be forged.

Kenny — who won easy re-election to his own parliamentary seat in Mayo, western Ireland, for the 12th straight time dating back to 1975 — says he cannot consider forming a historic coalition with longtime nemesis Fianna Fail until full results are declared Sunday or Monday.

He concedes that Ireland could face a second 2016 election if he or Fianna Fail chief Micheal Martin are unable to forge a parliamentary majority with each other or other smaller parties.

“That’s the difficulty,” he said when asked of the possibility of a second election to overcome a hung parliament. “Obviously I’d like to think that it will be possible, given the final results, to be able to put a government together.” 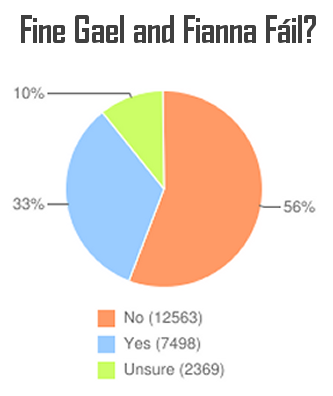 What a weekend Dude agus Dudess!

Tuffy, Stagg, Byrne and a rake of backbenchers, 3 Labour Ministers, 3 Junior Ministers, Lucinda Creighton plus a long list of TROIKA-AGENT ARSEHOLES given their P45s by the people.

Waiting to see what happens to Mr. Teneo himself, Alan Kelly in Tippereary.

What was really telling was the spin being pushed by Labour- 'We put the country before the party, made difficult decisions, blah blah blah'.

No, you bastards, you said to yourselves 'Let's eat the poor', now piss off.
You together with Fine Gael have the blood of at least 900 suicides on your hands. Burn in hell. Oh, and you can all quote me on that...

The political party system is on the wane. The Establishment is fractured and put on notice.
The generational/urban/income shift has just gained traction and is now unstoppable.
The data proves you're finished NWO. Time to get out...

NWO Central Command
has taken note of your
rabid triumphalism

Bankster Issues Alert To Other Banksters: 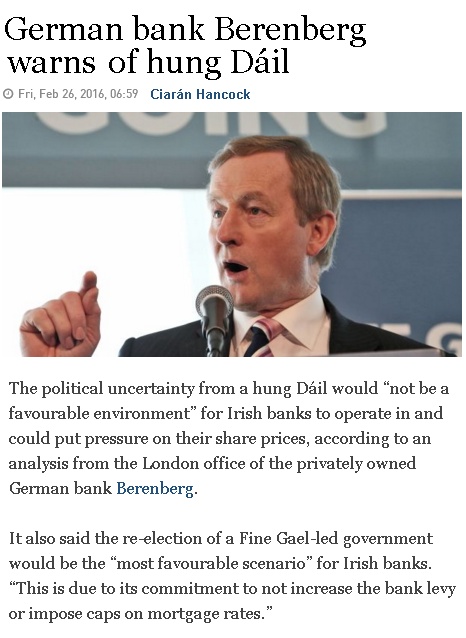 So, some rural and other voters
swung back to the Fianna Fail party?! 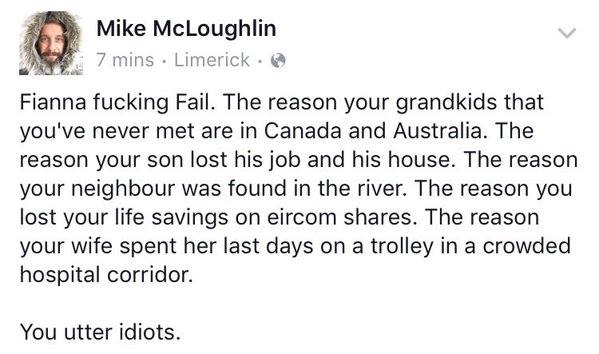