You'd think this guy would be an easy target. Yet it seems he was just silenced on Forbes and otherwise media has been relatively silent. No big cancel party in the NYT and WaPo (although they seem busy canceling their own and fighting with silicon valley people on Twitter).
Their silence on this is interesting...but it's also being reported by the fakes. Pretty sure Zerohedge is a little suspect, but it would also make sense to let them take it and run as limited hangout. Zero is only really popular with the libertarian wing and would guarantee nobody on the left pays it any attention.
Also can we trust this guy when he's selling a book?

I used to read FORBES regularly when it was an interesting magazine with some excellent writers and very useful information.

Now it is just another CiaNN.

In other words, NWO crap.
Top

The current Solar Minimum (period between Solar Cycles 24/25)
has now recorded its fifth period of 30+ Spotless days.. the last
time it achieved this was at the turn of the last century whereby
there was six such events. This is a very deep Solar Minimum
period.. FORECAST=COOLING 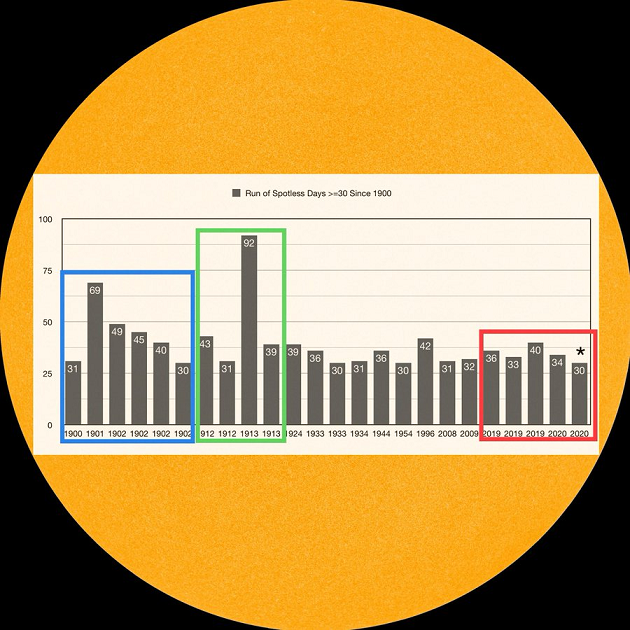 Solar Cycle 25 is officially underway. NASA and NOAA made the announcement during a media teleconference earlier today. According to an international panel of experts, sunspot counts hit rock bottom in Dec. 2019, and have been slowly increasing since.

NASA and NOAA made the announcement during a media teleconference earlier today. According to an international panel of experts, the sunspot number hit rock bottom in Dec. 2019, bringing an end to old Solar Cycle 24. Since then, sunspot counts have been slowly increasing, heralding new Solar Cycle 25.

“How quickly solar activity rises is an indicator on how strong the next solar cycle will be,” says Doug Biesecker of NOAA’s Space Weather Prediction Center, co-chair of the Solar Cycle 25 Prediction Panel. “Although we’ve seen a steady increase in sunspot activity this year, it is slow.”

The panel believes that new Solar Cycle 25 will be a weak one, peaking in 2025 at levels similar to old Solar Cycle 24. If their prediction is correct, Solar Cycle 25 (like Solar Cycle 24 before it) will be one of the weakest since record-keeping began in 1755.
Minds are like parachutes.
They only function when open.
Top

UPDATE ON ABOVE STORY:

New sunspot cycle could be among strongest on record

If the new NCAR-led forecast is borne out, it would lend support to the research team’s unorthodox theory – detailed in a series of papers published over the last decade – that the sun has overlapping 22-year magnetic cycles that interact to produce the well-known, approximately 11-year sunspot cycle as a byproduct. The 22-year cycles repeat like clockwork and could be a key to finally making accurate predictions of the timing and nature of sunspot cycles, as well as many of the effects they produce, according to the study’s authors.

BOOK:
https://www.amazon.co.uk/Fake-Invisible ... B08T6FFY6S
Minds are like parachutes.
They only function when open.
Top

2050 is a long way off and I doubt if I will still be walking the earth then.
A lot can happen between now and then.

Piers Corbyn pointed out that the oil companies are actually MAKING money from this green shit!

Climate change is simply another planned road to global genocide, as fewer and fewer people are able to buy energy.

Some wise souls, such as Catherine Austin Fitts have opined that the usury banking satanists will fail in these plans.

Remember that God is just.
AKA Karma
Top

The attachment reef.JPG is no longer available